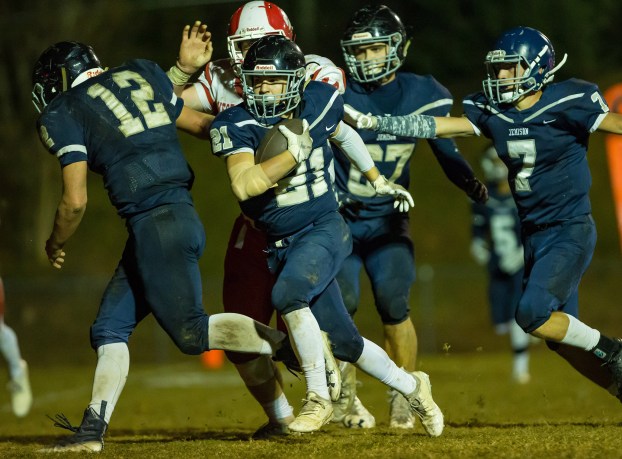 The 2018 football season came to a wrap on Nov. 2 for the Jemison Panthers with a 33-13 loss at home to the West Blocton Tigers.

The Tigers would waste little time putting the first points of the game on the board as Jamon Johnson broke lose for a 73-yard touchdown.

The play would be negated, however, thanks to a block in the back against the visitors that would bring the ball back to the 25. Three plays later and the Tigers found the end zone again thanks to a 3-yard touchdown run by Cameron Shadwick, and this time it would count as West Blocton took an early 6-0 lead.

The Panthers looked poised to answer with their opening drive after a pair of big first down plays by A.J. Jackson and Noah Gilliland. The Panthers would drive as far as the Tigers’ 16-yard line before the drive would stall and a 29-yard field goal would sail right of the uprights to turn the ball over to the Tigers.

A quick three and out by the Tigers would see the Panthers take their second possession of the night at their own 42. A pair of first down runs by Gilliland, along with one from Daniel Martin, would move the Panthers down inside the Tigers red zone. Gilliland would put the Panthers on the board with a 9-yard touchdown run that would make it 7-6 in favor of Jemison early in the second quarter.

The Jemison lead would be short lived, however, as West Blocton would answer right back with a 67-yard scoring drive that would be capped with a 25-yard touchdown run by Shadwick. With David Morris adding the two-point conversion, the Tigers would take a 14-7 lead.

Martin would give Jemison a big first down on its ensuing possession that would move the Panthers out near midfield. A first and 10 at their own 46 would see a Jemison fumble scooped up by the Tigers and returned for a West Blocton touchdown that made it a 20-7 Tigers lead with 7:05 remaining in the half.

West Blocton would maintain their 13-point lead through the closing minutes of the second to take a 20-7 advantage into the halftime break.

A pair of scoreless possessions by each team to start the second half would see the Panthers start their second possession of the night at their own 27. A deep completion from Martin to Daniel Lowery would move Jemison down to the West Blocton 34, while another completion by Martin would make it first and 10 at the West Blocton 14. One play later, Jackson would make it a 7-point game after a fourteen yard touchdown run.

Again, the Tigers would answer right back as Keontae Taylor would field the ensuing kickoff at his own 7-yard line and take it 93 yards to the house for a West Blocton touchdown that would bring the score to 27-13 with 1:15 remaining.

The Tigers would tack on one more for the evening midway through the fourth, as Blake Morris would break lose for a 50-yard touchdown run that would bring the game to its final score of 33-13.

“These guys never stopped fighting, and that is something that they can always hang their hats on,” said Jemison head coach Van Clements. “The are going to show up to go to work when it is time to go to work, and they are going to give their best effort day in and day out. At the end of the day, that is all you can ask for from a group of kids. Wins and losses are important, but at the end of the day these guys show up for work and they work hard and as a coaching staff and a coach myself, that means a lot.”

Gilliland led the Panthers ground game with 107 yards on 24 carries with a touchdown, while Martin finished with a 6 –for-18 performance through the air for 88 yards.