Justin Caton of Thorsby has been a NASCAR fan for as long as he can remember, and he was granted an opportunity of a lifetime when he met his favorite driver, Dale Earnhardt Jr., as a guest of the Rachael Ray Show.

It was an opportunity that wound up being more than two years in the making, after his wife Bridget was watching the Rachael Ray Show while on maternity leave with their now 2-year-old son Cooper.

While watching the show, a spot came on asking if any viewers are “NASCAR’s biggest fan.” She typed up a letter while holding Cooper and sent it to the show.

“I thought I’d never hear from them again,” Justin said.

Instead, he received another phone call from show representatives later that day, which led to answering several questions about himself and his passion for NASCAR during multiple phone interviews.

According to Justin, he was one of hundreds of fans included in the vetting process. 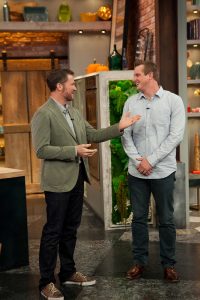 Dale Earnhardt Jr. and Justin Caton chat during the show.

After being selected, Justin took a plane to New York City along with Bridget and his parents.

“A lot of people kept asking me why we were going to be on the show?” Justin said. “All I knew was that they [Rachael Ray Show] were asking me a lot of NASCAR questions.”

Following an emotional video segment where Bridget was interviewed, Justin was called to the stage, and Rachael Ray wasted no time calling out Earnhardt Jr. from backstage for a surprise visit.

“Never in a million years would I have guessed that Dale Earnhardt Jr. would be there,” Justin said. “That was just an unreal deal.”

According to Justin, he knew that something was up, but thought that it would be a video chat or race tickets. He never dreamed that he would have the chance to meet Earnhardt Jr. in person.

The encounter included far more than just an introductory handshake. Justin and his family went backstage after the segment and talked “for a while” with Earnhardt Jr.

“You don’t usually get to meet your heroes,” said Allen Caton, Justin’s dad. “It just thrilled my heart to [see his son experience that].” 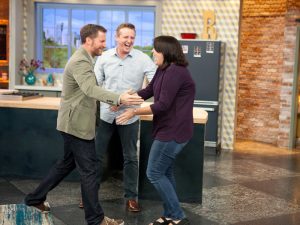 Earnhardt Jr. also invited Justin and Bridget to be his guests at next year’s Southern 500 at Darlington Raceway in South Carolina on Labor Day weekend.

Justin is also a racer himself. He competes in the late model sportsman class at Montgomery Motor Speedway and won five out of 10 races to claim the 2014 championship.

He has followed the racing career of Earnhardt Jr. and was also a fan of Dale Earnhardt Sr. He has several collectibles and memorabilia that show his support of the legendary racing family.

His earliest memory of being a NASCAR fan was when his dad got him a 1:24 scale die-cast of Darrell Waltrip’s car when he was about 5 years old.

“Justin is a great example of NASCAR fans,” Earnhardt Jr. said on the show. “They’re loyal and passionate.”

While in New York City, the Catons did some sight seeing that included visiting the Empire State Building and the 9/11 Memorial.

It was the first time that he had experienced the hustle and bustle of New York City.

“I was probably more nervous about being in New York [City] than anything,” Justin chuckled.

By J.R. Tidwell / Editor   The Chilton County Chamber of Commerce will be hosting two big events coming up... read more