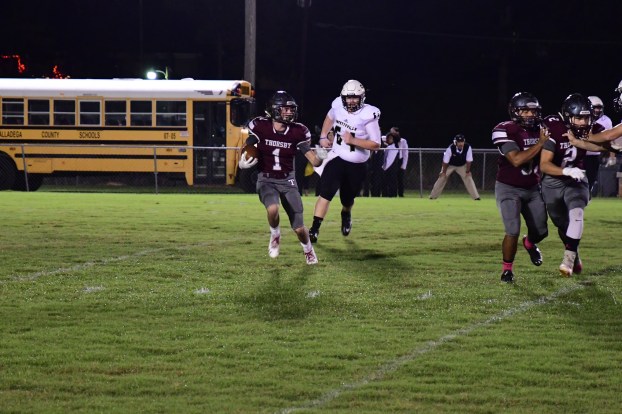 It took only one half of play for the Thorsby Rebels to take a commanding 50-6 lead over the Fayetteville Wolves on Oct. 11.

The second half was shortened to two six-minute quarters with a running clock, so 50-6 became the final by which the Rebels (7-1, 4-1 Class 2A, Region 4) won the contest.

“We talked about getting out there early, getting a lead and leaving no doubt to give some of our young guys a chance to play, and that’s what we did,” Thorsby head coach Daryl Davis said. “I don’t blame (Fayetteville for asking to shorten the second half). I have been on that side, too. Our guys played hard. They got in there and got it done.”

After holding the Fayetteville offense to a punt in the Wolves’ opening possession, Thorsby ended its first drive with a 12-yard touchdown pass from Christian Fortner to Brody Barnett. A missed PAT left the Rebels with a 6-0 lead.

The Rebels blocked a Fayetteville punt and Tyler Ray recovered possession at the Wolves’ 12-yard line to close to the first quarter.

This set up a goal-line touchdown run by Tyler Jackson to start the second period and give the Rebels a 27-0 lead.

An interception by Cole Hight led to an 85-yard touchdown run by Fortner, who broke one loose around the left side and made tacklers miss before finding the end zone.

Fortner hit Tucker Patterson with a pass on the next play, and Patterson juked between two defenders before scoring from 45 yards out to make it 43-0 Thorsby after Fortner connected with Barnett on a conversion.

Fayetteville broke a long touchdown run for its lone score of the night two minutes before halftime to narrow the gap to 43-6.

Jackson capped off the next Thorsby drive with a 6-yard touchdown run for the Rebels’ final points of the night.

Thorsby has next week off before taking on Central Coosa on Oct. 26.

“It’s going to help us,” Davis said. “We’re beat up pretty bad, and we’ve got some guys that need to heal up. We will give them a couple of days off. It’s important. I’m glad we got it later in the year.”

The Rebels have a chance to set a school record by winning nine football games in one season for the first time in program history. THS can do so by defeating Central Coosa and Billingsley in the final two games of the 2018 regular season.

“We need to keep working and getting better every day,” Davis said. “(The players) grasp what we are trying to do. They have played hard all year, but now it’s kind of clicking. There are things I don’t have to talk about anymore because everyone knows what to do. That makes it easier on us. When we can get our young guys some playing time like we did tonight, it’s good.”

By J.R. Tidwell / Editor A new clothing store has opened its doors for business in Clanton. Willow 31 hosted... read more