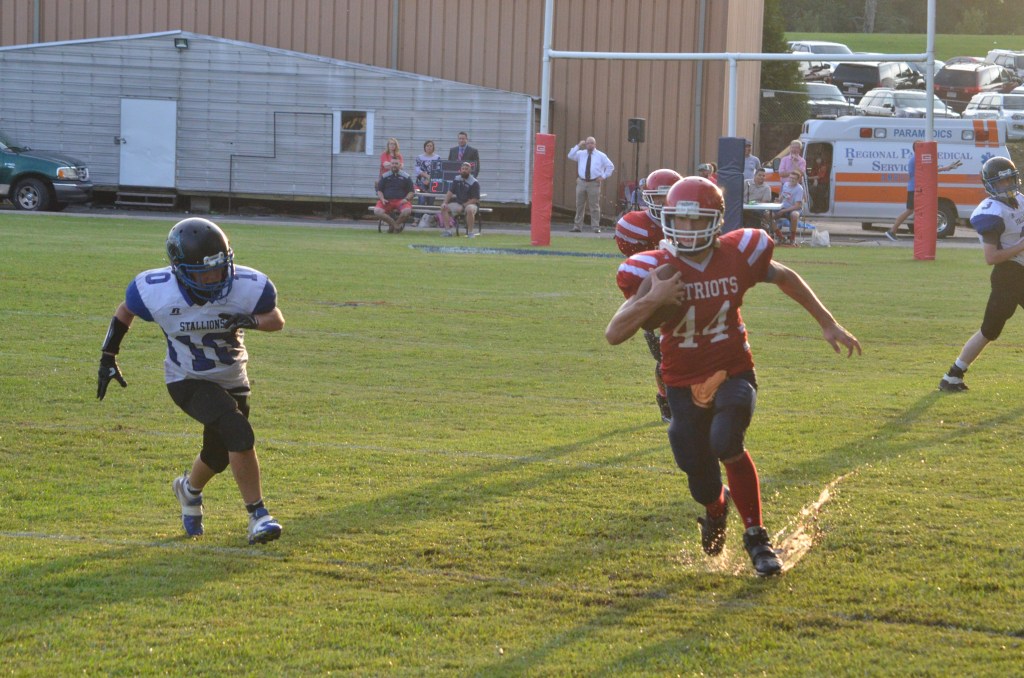 Jakob Reiter makes a run around the left side for Chilton Christian. (J.R. TIDWELL/ADVERTISER)

Brandon Reiter returned the opening kickoff about 40 yards for a touchdown, and the Patriots never trailed en route to a 53-19 victory.

“It was a really good, hard-fought, clean game,” said CCA head coach David Reiter. “We have faced a lot of teams, and even in our conference sometimes they don’t play so clean. It was a good game to coach. They have a good team, and they didn’t quit. Our boys didn’t quit. All of our seniors had some scores. It was a good night for our senior night and homecoming.”

Jakob Reiter scored on a 27-yard run as the final second of the opening period ticked off. The ensuing PAT made it a 14-0 CCA lead.

Justin Bice made a 24-yard scamper into the end zone a short time later to extend the Patriots’ advantage. The hold on the point after attempt was muffed, but Joseph Bracken connected with Gavin Reiter for a conversion to salvage a point and make it 21-0.

Marshall got on the board with a 33-yard touchdown pass with 6:58 remaining before halftime to cut the Patriots’ lead to 21-6.

A long reception by Bice set up a short touchdown run at the goal line by Bracken to make it 29-6 after the PAT, but the Stallions completed a 63-yard touchdown pass and a conversion run to cut the gap to 29-13 with only 36 seconds remaining before the break.

However, Bice broke a 63-yard touchdown run for CCA as time expired to put the Patriots up 37-13 at intermission.

With Chilton Christian firmly in control of the contest, the scoring slowed down in the second half.

“We were able to dominate the game and control the pace,” David Reiter said.

Marshall scored on an 18-yard pass for the lone score of the third quarter, which narrowed CCA’s advantage to 37-19.

About two minutes later Donavan Norcross, the lone eighth grader on the Patriots’ squad, broke the plain from 11 yards out to set the final at 53-19.

The win puts CCA at 4-3 overall on the season and 4-2 in conference play.

That means the Patriots will be heading to the playoffs for only the second time in program history.

“We are definitely going to be in the playoffs,” David Reiter said. “This was our last regular season game. A lot of teams have games left, so we have to wait and see who wins and what shakes out. We know we won’t be first and probably not going to be second. We think we will fall in about third in the playoffs, which means we would have to replay Connecuh and play them on their home field again. We lost to them last week. We had some players out, and didn’t have our long snapper. We both scored two touchdowns, but they made their kicks and we didn’t. That was the difference. We will have them next time.”

However, the playoffs will not commence until late October, so there will be a long break between now and the Patriots’ next contest.

“That’s worrisome,” David Reiter said. “We have a cross country meet coming up, and I will help coach that team. I expect most of the players to be working out with us to stay in shape. We are still going to practice. We’ll be ready.”

According to Coach Reiter, Chilton Christian “won it all” the first year the school fielded a team, about seven years ago, which was the year the six-man league was founded.

“After that, they kind of fell off,” he said. “I have been trying to rebuild the program the last two years. Even though we didn’t have a team last year, I still worked with the kids on strength and conditioning. It was more about building their trust. It also got them used to working hard if we had a team again. This whole season these boys have worked hard and do not quit. I’m really proud of them.”