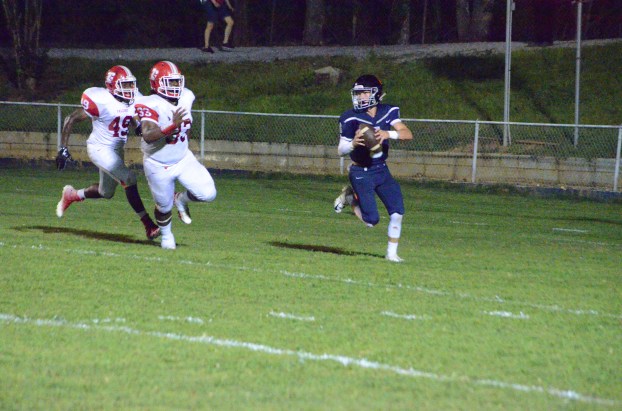 Jemison quarterback Daniel Martin is flushed from the pocket by Central defenders.

The Falcons outpaced the Panthers on the ground behind workhorse running back Javonta’ Leatherwood, who had all five touchdowns for Central on the night.

“We knew that’s what they were going to try to do,” said Jemison head coach Van Clements. “I thought at times we played well. I thought overall our defense played better than we have the last two weeks, we just have a couple of things we’ve got to work on and continue to get better.”

The Falcons took the first play of scrimmage deep into Panther territory, but a block in the back negated the play.

Central converted on two fourth downs en route to a 7-yard touchdown run by Leatherwood with 5:04 left in the first quarter. The Falcons converted the run to go up 8-0.

Jemison made it across midfield on its first offensive possession of the game, but a fumble ended the drive for the Panthers.

The Jemison defense came up big on the next drive by making a stand and forcing a turnover on downs at the Panther 5-yard line.

However, Jemison’s next possession ended in a high snap over the punter’s head that was kicked out the back of the end zone to concede a safety instead of a touchdown.

Leatherwood punched in a run at the goal line to extend the Falcons’ lead to 16-0 a few minutes before halftime, and that scoreline would remain at the break.

Jemsion got onto the board just three minutes into the second half when Deonte Williams punched in a touchdown run at the goal line. A conversion by the Panthers cut the Falcons’ lead to 16-8.

Leatherwood capped Central’s next drive with a short touchdown run, and Jemison fumbled and lost the ball on the ensuing kickoff. This led to a 30-yard touchdown run by Leatherwood that made it 28-8 Central.

Daniel Martin ended the next Panther drive with a short touchdown run. After the extra point, Jemsion cut Central’s lead to 28-15 with less than a minute to go in the third quarter.

Leatherwood scored the final touchdown of the night for the Falcons with another short run, and a short run for a score by Jemison’s Noah Gilliland set the final for the night with just over a minute left to play.

“We came up a little short tonight,” Clements said. “We had a couple of turnovers here and there that put us in a hole early. Those guys fought back in the second half. We are going to get better and start back on Monday.”

By J.R. Tidwell / Editor The unemployment rate for the month of July was 3.9 percent here in Chilton County,... read more