The Jemison varsity cheer squad brought back some top honors after competing in a Universal Cheerleaders Association camp in Panama City Beach, Florida, July 30 to Aug. 2.

It was an excellent way to end the summer, and the performances during the event have given the team a ton of momentum heading into the 2018-2019 campaign.

“We came home and everyone has just been telling us how proud they are of us,” captain Makenna Wiseman said. “It’s great to know that our community is behind us.”

It had been four years since the group had attended the summer camp.

Eighteen teams took part in the competition from schools throughout the nation. The teams were split into divisions based on school size.

The Panthers won the rally routine category in their division.

“It was really rewarding, because we all worked so hard,” Wiseman said.

Each member of the team had a role to play during the winning-performance in the rally routine portion. 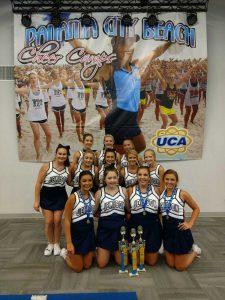 It had been four years since the JHS varsity cheer squad had attended the camp. (Contributed photo)

According to Wiseman, the judges look for the routine to be unique and something that the group could perform during a pep rally.

As a result, the camp was very helpful in allowing Jemison to hone their routine for the new school year.

“That is just a huge honor,” Wiseman said. “It’s so exciting that four of our girls got All-American after so many girls had tried out.”

According to Wiseman, Jemison was the only school at the camp to have four girls selected as All-Americans.

Despite the success, such camps are designed to promote both team and individual evaluation.

For Fricke the competition has made her strive to improve her jumps.

As captains of the team, Wiseman, Evans and Pace attended leadership classes.

“Coming from the camp, we have brought home experience and new traditions for our cheer squad for the whole community to see,” Evans said.

By J.R. Tidwell / Editor When students returned for another year of learning at Thorsby School, they were greeted by... read more