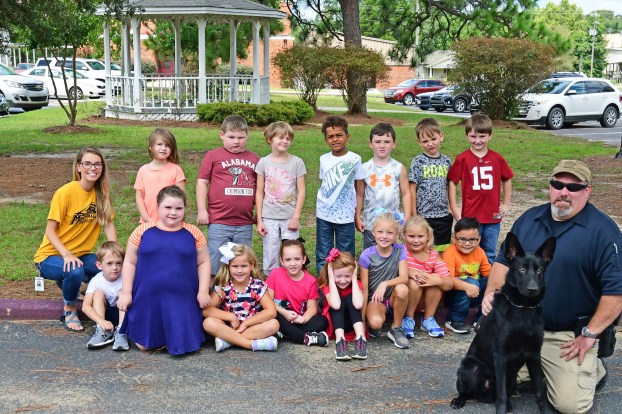 When students returned for another year of learning at Thorsby School, they were greeted by the institution’s newest security measure and drug deterrent.

William “Billy” Scarborugh is now the school’s first full-time security officer. He and his K9 partner Shep patrol the premises each day.

“This is the first time for Thorsby PD to ever have (a School Security Officer) as far as I know,” said Thorsby Police Chief Rodney Barnett. “William is an animal lover anyway. He was going to be transitioning into the school this year as a security officer. He had been wanting a drug dog, and we got it approved through the council for him to get and train that dog.

“It’s a young dog, but it’s already made a few cases, not here but in Jemison and elsewhere. He has him at the school every day with him, and the dog is essentially an extension of him and part of the weaponry we can use against drugs in our schools.”

Shep’s father is Max, a K9 with Clanton Police Department who partners with Capt. David Clackley to help keep drugs out of schools in that city.

Scarbrough and Shep provide multiple benefits to Thorsby School. The first and biggest benefit is security. Scarbrough is an armed police officer that is at the school full-time, making him a line of defense against any internal or external threat.

Barnett said his personal connection with Thorsby School makes him willing to take a bullet for any student or staff member there if need be, and he said Scarbrough felt the same way.

The second benefit is the ability to search for drugs that might have been brought to the school, which hopefully becomes a deterrent for anyone who might be thinking of bringing illegal substances to the campus.

“We have had some cases in recent years where I would get complaints that kids were going into the parking lot on break and maybe smoking a joint, cigarettes or something else they aren’t supposed to be doing,” Barnett said.

“Billy works an eight-hour day, and he walks six or seven of those eight hours checking the parking lots with the dog. If the dog smells something around a car and indicates on it, Billy can get with the principal. When you have good cause, the school system can call a kid to the office right then and tell them they want to look at their car. Any vehicle on that property, including teachers’ vehicles, is subject to search.”

Barnett said he is “anxious” to see just what kind of impact Scarbrough and Shep have had at Thorsby School by the end of the year.

“I know what we’ve been having,” he said. “Don’t get me wrong. Thorsby hasn’t been eat up with drugs, but the cases we have had I have to think it will be lower because they never know when they might get caught.”

“(Scarbrough) is there not just for searching for drugs,” Barnett said. “He is there to be a good mentor for the kids. Once they trust him, they can bring any issue they have to him. If it’s something home related, he can pass it on to the counselors.”

Barnett also said Scarbrough has a reputation as being tenacious when it comes to trying to resuscitate someone who might be having a medical emergency.

“If someone has a heart attack and needs resuscitation, (Scarbrough) is the man for that job,” Barnett said. “He is an animal when it comes to trying to resuscitate someone. I have had many compliments in the past, even from rescue workers, that if it wasn’t for Officer Scarbrough, this person wouldn’t still be breathing. Those things make you feel good.”

Extra measures are being taken to make sure that things operate smoothly during Thursday’s football opener between rivals Thorsby and... read more