The Farmhouse Café in Thorsby celebrated its five-year anniversary with a customer appreciation event outside the restaurant on Aug. 15.

According to owner Tiffany Collins Hammock, the event was a way to say thanks to the customers that have shown continued support for the business over the past handful of years.

“We’re just giving back to the community that has given us so much,” Hammock said.

It is not just the Thorsby community that has shown support, but also many residents from throughout Chilton County.

Sharee Wells is one of the Farmhouse Café’s regular customers. She has a nearby business and often orders her food to go.

“The food is excellent, and the customer service is great,” Wells said. 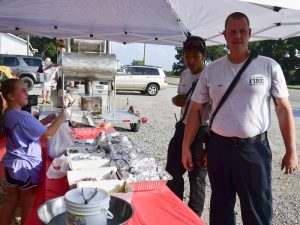 Members of the Thorsby Fire Department stopped by to show their support of Farmhouse Café. (Photo by Anthony Richards)

Jamey Miller and Terry Underwood have been coming to the restaurant since it opened.

It is the mixture of comfort food and a homey atmosphere that keeps them coming back for more.

According to Miller, the omelets are one of her favorite menu options for breakfast, but there are so many other tasty choices to choose from regardless of whether it is breakfast or lunch.

Two hundred burgers and hot dogs were grilled and handed out to those who stopped by the event.

Several of the restaurants “regulars” stopped by, which included an appearance from members of the Thorsby Fire Department.

By J.R. Tidwell / Editor Visitors who trek to Senior Connection in Clanton on Aug. 22 from 10 a.m. to... read more