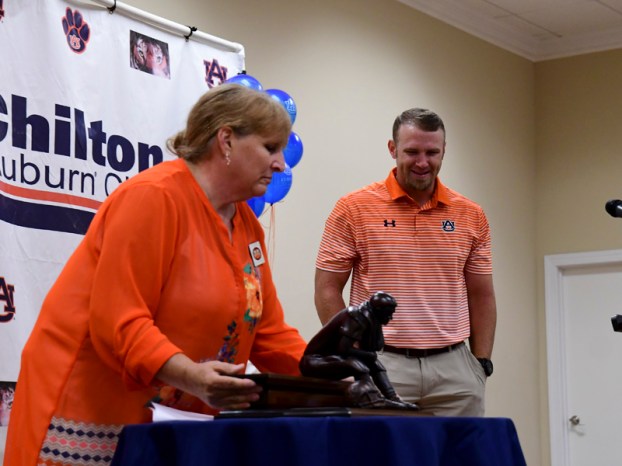 Tyler Stovall was the recipient of the 52nd Annual Unsung Hero award during a banquet hosted by the Chilton Auburn Club on Aug. 2.

“When you say the term ‘Auburn family,’ it truly means something to me,” Stovall said. “Things like this [Unsung Hero Banquet] don’t just happen everywhere.”

The honor was the culmination of a long journey for Stovall and his family.

“This is a really neat deal,” Stovall said. “For me and my wife Kristi, this is probably one of the more special awards. It entails everything that we did.”

He was drafted out of high school by the Atlanta Braves in the second round of the 2008 MLB draft before eventually walking on to the Auburn football team in 2014, where spent the past four years as a punter and primary holder with the Tigers.

“I got to live out two childhood dreams,” Stovall said. 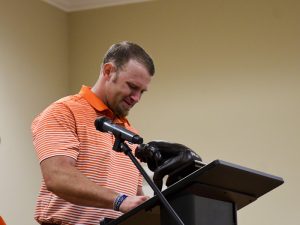 Stovall fights back emotions before giving his acceptance speech. (Photo by Anthony Richards)

Due to Stovall being older than most of his teammates, he was given the nickname “Papa Stove.”

According to Stovall, he and his wife opened up their home to his teammates. It served as a family friendly-place that included playing video games or hide-and-seek in the dark, which proved to be a favorite.

“We provided a home away from home for the guys,” Stovall said.

Auburn head baseball coach Butch Thompson was the guest speaker at the event.

The Unsung Hero Banquet is one of the longest running honors within the system of Auburn clubs.

Three scholarships were handed out during the event to Abigail Porter, Tilby Miller and Gage Minor. All three will attend Auburn University this fall.

Miller received the foundation scholarship, which will now be named after Jim Wadsworth following a special presentation during the banquet.

“An education is something you can’t lose,” Wadsworth said in a speech to the crowd. “No one can take it from you.”