The Thorsby Fire Department was dispatched to a structure fire at approximately 3:40 a.m. on July 31, according to a press release.

The fire took place at a single story commercial building located in the 21000 block of U.S. 31.

Engine 31 arrived first on the scene to the sight of heavy smoke showing and fire breaching the building’s roof. 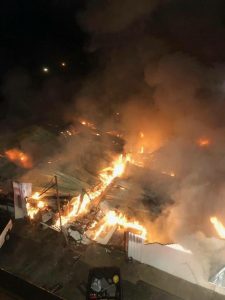 Jemison, Clanton and Collins Chapel Fire Departments assisted on the scene. The cause of the fire is still under investigation. (Contributed photo)

Once it was determined that there was no one was inside the burning structure, offensive measures were ceased and defensive operations began in order to protect exposures and contain the fire.

The press release thanked the Jemison, Clanton and Collins Chapel Fire Departments for their assistance during the incident. No injuries were reported.

The cause of the fire is under joint investigation by the Thorsby Fire Department, Thorsby Police Department and the State Fire Marshal’s Office.

SPAN Class of 2018 honored at commencement

Graduates of the SPAN (Special Programming for Achievement Network) of Chilton County Class of 2018 have moved over their tassels... read more