Balls were flying through the air during a 7-on-7 camp hosted by Isabella on July 26.

It was primarily a four-team camp with Thorsby, Billingsley and Marbury also participating. However, Maplesville had a junior varsity and offensive line presence at the camp.

“We go to three or four a year, but we like to end at home,” Isabella head coach Tate Leonard said. “We like to have it in front of our home fans, and [we] had some really great weather.”

Improving the passing game is what 7-on-7 camps are designed to work on.

Throughout the event, quarterbacks went through their progressions while wide outs and defensive backs continually battled for position on the outside.

“All summer long our routes and timing have gotten better,” Leonard said. “Every group that played today executed, and that’s what you want to see.”

Each team played each other in 20-minute games during the camp. It allowed for players to go up against a variation of talent levels and classifications. 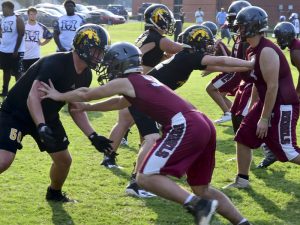 Offensive and defensive linemen took part in drills during the camp. (Photo by Anthony Richards)

According to Leonard, the more games that were played really began to test a team’s conditioning.

“We got better as the 7-on-7 went,” Leonard said. “When some other teams got tired, we were still fresh. I was glad to see that.”

“You’re just looking to get better and use what you’ve been learning all spring [and summer],” Brown said.

According to Brown, he enjoyed going up against bigger offensive linemen, because it helps prepare him for what he will face come the season.

“You know that you’re going to be playing teams on the schedule that have some big boys,” Brown said.

Since Leonard’s arrival at Isabella three years ago, he has scheduled a 7-on-7 camp at home to put an exclamation point on the end of summer and prior to the start of fall camp.

Due to a significant increase in participation of the formerly combined Jemison High and Middle schools band, JMS has brought... read more