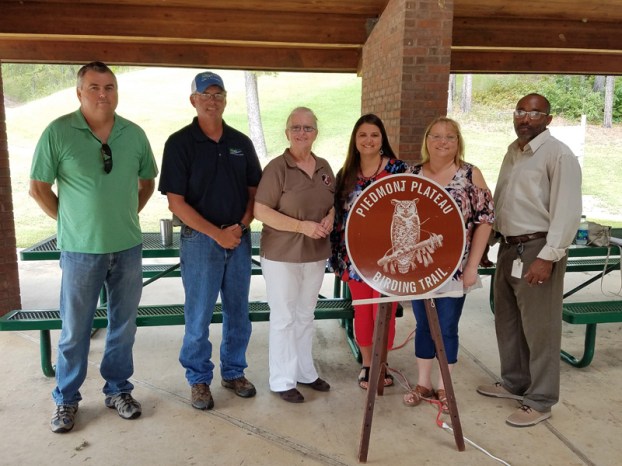 Minooka Park was introduced as part of the Piedmont Plateau Birding Trail after a ceremony on July 19. (Photo by Anthony Richards)

Minooka Park is the newest member of the Piedmont Plateau Birding Trail after an introduction ceremony was held on July 19.

The park will be one of the 280 designated sites that spread throughout the eight trail regions of Alabama.

Minooka Park is the third park in Chilton County to be chosen as part of the trail. It joins Confederate Memorial Park and Maplesville City Park.

According to Joanne Ninesling, with Alabama Birding Trails, the annual economic impact of wildlife watching in the state is $734 million.

“We’re happy to be part of the birding trail, because it appeals to another group of people that may not have visited the park before,” Minooka Park manager Gerald Arrington said.

Arrington hopes that people will come for the birds, but stay for the park.

“When they see our facility, they may want to stay overnight and camp,” Arrington said. “It’s something new for us.”

According to Ninesling, a conservationist has to come out and evaluate the park to find out which birds can commonly be sighted in the area.

“It’s another step for us in getting our name out there,” Arrington said. “We’re growing and want to increase the number of people that come visit the park.”

The park has received assistance and upgrades over the years from federal grants along with help from the Cawaco Resource, Conservation and Development Council.

“The person who really initiated things and deserves the most credit for getting on the birding trail is Gay West [with the Extension Office],” Arrington said. “She’s the one that put me on the right track.”

According to Arrington, plans for the future include adding a hiking/birding trail that would be off limits to ATVs and a little bit more challenging than the current walking trail around the lake.

Residents are welcome to donate birdhouses to put around the park in order to help attract birds along the paths.

Calhoun ‘honored’ to be next county probate judge

By J.R. Tidwell / Editor Jason Calhoun was driving down Highway 191 the night of the Republican Primary runoff on... read more