JHS alum places wreath at Tomb of the Unknown Soldier

Independence Day was an important time for Americans, but for Andy Hopper the days leading up to the celebration were quite memorable as well.

Hopper was selected to place the wreath at the Tomb of the Unknown Soldier in Washington D.C. during a ceremony on July 2.

He was born and raised in Jemison, but now lives in Houston as a florist.

The experience of placing the wreath was special enough, but what made Hopper feel even more honored was the fact that he also made the wreath that was presented.

“It was a very humbling experience, standing up there on that hill,” Hopper said. “To be there in that moment is surreal.” 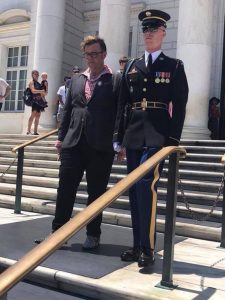 Hopper prepares to place the wreath at the Tomb of the Unknown Soldier. (Contributed photo)

He is a member of the American Institute of Floral Designers, which is a non-profit organization dedicated to promoting floral design as a profession.

It was through the organization that the selection process for the wreath making took place.

Hopper made the trip from Houston to Washington D.C. and constructed the wreath at a florist shop in Bethesda, Maryland.

According to Hopper, there were many rules and requirements that had to be met leading up to the ceremony.

“It’s very formal,” Hopper said. “They make you aware that it is a prestigious thing.”

As he placed the wreath, he could not help but think about all those that he knew who had served in the military. One of them was his grandfather, who fought in World War II.

Hopper graduated from Jemison High School and studied interior design at the University of Montevallo.

It was the first time that Hopper had been to the Tomb of the Unknown Soldier, and he was able to pay homage the best way he knew how.

“You think about how not many people have had that opportunity [of placing the wreath],” Hopper said. “I was crying, because it was such an emotional moment. I still don’t have any words for it.”

*This story has been updated to include clarifying information provided by law enforcement.   Two males were shot and killed... read more