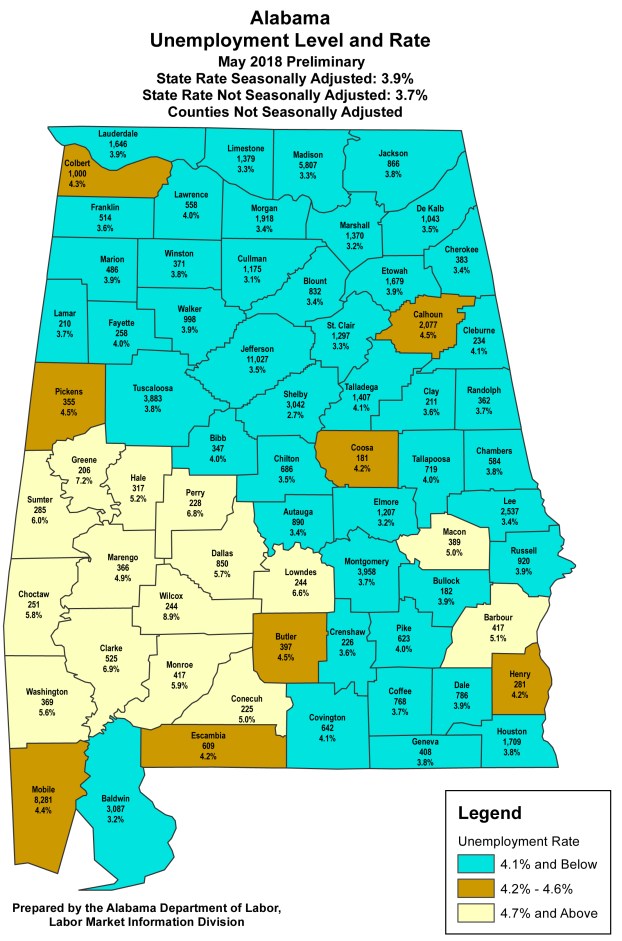 The average unemployment rate for Chilton County over the first five months of the 2018 calendar year have remained lower than the numbers a year ago.

According to the Alabama Department of Labor, the average unemployment rate for Chilton County from January through May of this year has been 3.6 percent.

That is below the 4.0 percent average unemployment rate Chilton County had for the 2017 calendar year.

The unemployment rates for the months of March, April and May have all been lower in 2018 than the numbers for the same months in 2017.

The unemployment rates for the county during the same months in 2017 were 4.7 percent, 3.8 percent and 3.8 percent respectively.

So far in 2018, each month has had a lower unemployment rate versus a year ago.

The unemployment rate for the state of Alabama was 3.9 percent in May, lower than the 4.6 percent during the same time last year.

According to Alabama Department of Labor Secretary Fitzgerald Washington, Alabama’s wage and salary employment is at a 10-year high.

It measured 2,042,400 in May. The last time this figure was at or above this level was in December 2007, when it measured 2,045,800.
“Wage and salary employment in Alabama continues to increase significantly month after month,” said Washington. “(May’s) count is the second largest we’ve ever recorded, yielding only to pre-recessionary numbers. It represents the most jobs our economy has supported in more than a decade. Employers are hiring in Alabama, jobs are available in Alabama, and people are working in Alabama.”

According to a release by the department, over the year wage and salary employment increased 21,600, with gains in the manufacturing sector (+4,600), the leisure and hospitality sector (+4,400) and the professional and business services sector (+4,000), among others.

Wage and salary employment increased during the month of May by 7,000.

“We know that our economy is supporting record numbers of jobs, and we also know that Alabamians are working in record numbers — the most in more than 11 years,” said Washington. “Twenty-one thousand more people are working now than they were last year. That means more Alabamians are supporting their families and spending money in their communities.”

The 2018 Peach Auction set a record by surpassing $20,000 for the third consecutive year. The Clanton Lions Club raised... read more