For four years Jim Leachman had been told no, but one yes was all he needed to make a difference in someone’s life and complete the promise he made to a dying friend.

The long wait came to an end for the Jemison resident after he donated a kidney to Larry Kumabe of Hawaii.

The donation was the culmination of relentless trying. During that time he had several failed tests.

To Leachman, the kidney donation was not just a good deed, but a promise fulfilled to his friend Danny Prince, who died of cancer.

He moved with his family from Washington to Jemison about seven years ago and quickly became close friends with Prince. The two shared a love of bass fishing.

“One night while his wife was at work, I was sitting with Danny and holding his hand,” Leachman said. “I looked over and said ‘I can’t save your life, but I’m going to save somebody’s life in your honor.’”

A couple of days later, Leachman saw a commercial about kidney donation and began researching to find out more about it.

He created an online profile on matchingdonor.com.

His efforts to donate took him throughout the country to cities such as New York City, Philadelphia and Seattle to go through tests with the hope of passing the final step to getting approved to donate.

He tested to be a donor for about eight different people, but he kept being denied due to something coming up towards the end of the testing process.

“Something kept stopping me from donating,” Leachman said.

After a while, he saw a specialist at UAB Hospital and was prescribed a small dose of medicine to help with his blood pressure and ejection fraction, which is a measurement of the percentage of blood leaving your heart each time it contracts.

According to Leachman, the minimum requirement to be a donor is 50 percent ejection fraction, and he was at 45 percent.

“It was a small number, but it was a number,” Leachman said.

Leachman continued on the medicine for about a year while keeping in touch with a lot of people on matchingdonor.com.

“Yes they want your kidney, but just as much they want to know that somebody outside of their circle cares about them,” Leachman said. “Somebody that’s going to pray for them and talk with them.”

All of the people that Leachman had tested for wound up getting kidneys even though he was unable to be the one doing the donating in the end.

The conversations between Leachman and Kumabe initially started in 2015, but the two continued to stay in touch online.

Roughly a year since seeing a specialist, Kumabe asked Leachman if he would be available to donate, and the two began the testing process in March at the University of California, San Francisco Medical Center.

After returning to Alabama, Leachman received the verification phone call while on his way back to shore after fishing and could not believe what his ears were hearing.

“I just couldn’t stop crying,” Leachman said. “I was just so overwhelmed [with emotion], because for four years we were trying to do this.”

He eventually reached the shore and called Kumabe to pass along the good news.

According to Leachman, Kumabe had been searching for a kidney for six years and was going through 14 hours per day of dialysis.

Both Leachman and Kumabe made the plane trip to San Francisco and met for the first time in the days leading up to the surgery.

Leachman knew he wanted to put a spin on the serious nature of surgery, and after consideration showed up to the hospital wearing a gold zoot suit. 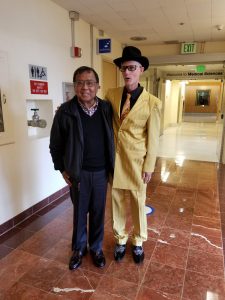 Leachman appeared on the day of surgery wearing a zoot suit. (Contributed photo)

The surgery was a success, as the kidney started working immediately for Kumabe.

“The next day I’m out of it and Larry’s walking by my room asking how I’m doing,” Leachman chuckled. “It is always harder on the donor than the recipient.”

Moving forward, Leachman plans to be an advocate for kidney donation.

“I push for it every day,” Leachman said. “There are 100,000 people waiting for a kidney right now, and 20 people a day die from kidney disease.”

The journey was long, but the result was as fulfilling as Leachman had dreamed it would be.

The Chilton County Sheriff’s Office has issued a BOLO (be on the lookout) alert for three suspects of a burglarized... read more