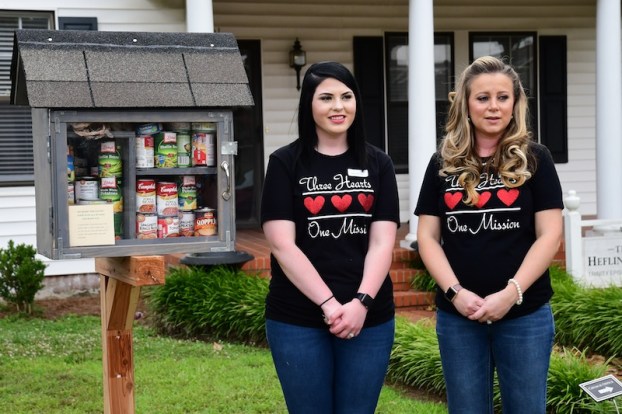 Stationed outside the church’s next-door Heflin House, the miniature pantry resembles a large birdhouse on a stand with a glass door offering a sneak-peek at its canned contents.

Co-founder Rachel Davidson of Three Hearts One Mission said the pantry is a safe source of canned goods for the needs of anonymous community members.

“We’re delighted this is going to be the first one, but we’re also looking forward to having more of them in different places and working with you in the years to come,” Janet Pandzik told Three Hearts One Mission founders during a dedication ceremony on June 22.

After a reading from Matthew 25, Father Bill King led an invocation of blessing over the pantry, its contents, the individuals it will impact and Three Hearts One Mission as baptismal water was sprinkled on the structure.

“I’d like to thank you for bringing this to us, and we accept this offering that the three of you have been giving to us and the opportunity to share in your mission, because this is such an important mission,” Pandzik said. “What you’re doing is going to touch so many lives, and it’s just going to have a ripple effect throughout time.”

As Ellison and Davidson ceremonially stocked the pantry, the small church gathering sang “We Are Standing On Holy Ground” by Geron Davis.

According to Davidson, the Three Hearts One Mission has established almost seven food pantries since the organization’s formation in January. Most pantries are located outside Shelby County churches, but Davidson said the nonprofit hopes to expand its impact further, ultimately partnering with public institutions, such as libraries, to reach more people in need.

The pantry located outside Trinity Episcopal Church was constructed by Gary Kendall, stepfather to Ellison and member of Zion Ridge Church of God in Clanton.

Kendall said Zion Ridge Church of God will soon be hosting its own dedication for an outdoor pantry.

For more information about Three Hearts One Mission, visit threeheartsonemission.com.

By JOYANNA LOVE/ Senior Staff Writer Sweet and savory dishes delighted the taste buds of both judges and attendees during... read more