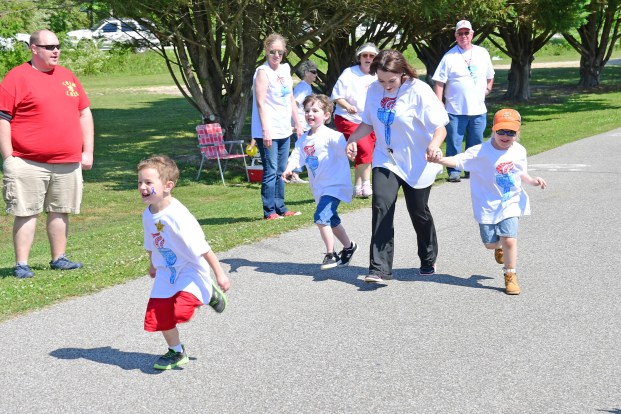 A group of athletes compete in a race heat during the Chilton County Schools Special Olympics track and field day May 2. Photo by J.R. Tidwell/Advertiser.

“Let me win. But if I cannot win, let me be brave in the attempt.”

That motto shown proudly at the front and center of the T-shirts worn by participants in the 37th annual Chilton County Schools Special Olympics track and field day May 2.

The event was held at Clanton City Park and featured students from elementary to high school age from the different schools across Chilton County.

Michelle Coppedge, the director of special services for CCS, organizes the event.

“It’s really not difficult,” she said. “I have the best volunteers ever. People are more than willing to help. They come out and donate their time and money. It takes a little bit of organization, but for the most part everybody around here just does it because they all love it too. It has evolved over the years. The SGAs have been involved. It’s something everybody loves.”

The event kicked off with a parade of schools around the track. Each institution had a banner with their school’s name leading its group.

Senior athlete Jesse Smitherman had the honor of bringing in the torch during the opening ceremony.

“He is our only senior athlete this year,” Coppedge said. “During the closing ceremony we will recognize him. All the participants receive a medal at the end.”
The athletes were able to participate in multiple events, and there were some other fun activities available to them.

“They will get to do a tennis ball throw, a softball throw, there are different track events, they will have a soccer kick and a running long jump,” Coppedge said. “Those are the events. There are also bounce houses, face painting and Kona ice for everyone. They have some playtime in the middle of their work time.”

Coppedge said she has been putting together the county Special Olympics for six or seven years now as part of the responsibilities that go along with her position.

“I do all sorts of things,” she said. “I oversee all of the schools to make sure their special education programs are running well. I help if they have issues. I love to go and visit, be with them and see their growth and improvement. Special Olympics is my favorite thing.

“This is just my second year in this position, but I have always worked in the system. I am finishing my 17th year. I spent 10 years in a position at the central office before I got this one.”

Coppedge said CCS has no plans to end the tradition of hosting the Special Olympics, adding that the event would continue “as long as I am here.”

“It is the most amazing feeling,” she said. “I don’t know that I could put it into words. I love it. It’s just about them. They get to shine. It is my favorite day of the whole entire year. I can make it through a whole lot of other stuff if I can make it to this day, because it’s a good day.”