Thorsby Drugs has become a staple since it opened its doors at its location at 4 Minnesota Avenue in downtown Thorsby nearly six years ago.

The secret to the success during that time is getting to know each of its customers on a personal level.

According to owner/pharmacist Christa Shields Hayes, developing those relationships was exactly what she had in mind when she opened the business in 2012.

Shields Hayes grew up in Jemison and was first introduced to the pharmaceutical field after getting a job working for Richard Wood at his drug store in Thorsby while in high school.

After earning a bachelor’s degree in biology from the University of Montevallo and a doctorate in pharmacy from Samford University, she worked for larger chain pharmacies before realizing that she wanted to return to the small town feel.

“That wasn’t personal enough for me,” Shields Hayes said. “I didn’t feel like I was making a difference. I just wanted to be accessible.”

The ability to hear people’s symptoms and direct them to the proper over-the-counter medication to help them feel better is something that Shields Hayes continues to enjoy about her job.

“It goes even further than that because of the fact that we know so many of our customers on a personal basis,” said Amber Carroll, business manager and sister of Shields Hayes. “We’re able to talk to them about their life, and it makes a difference. Some people just need a friend.”

Other than filling doctor-prescribed medications, Thorsby Drugs also offers the basic over-the-counter medicine, as well as a $1 wall that features a variety of low-priced items. 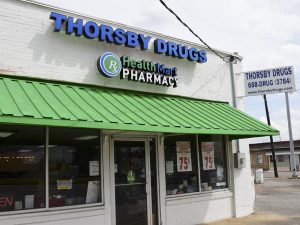 Thorsby Drugs has been providing pharmaceutical services to residents for the past five years. (Photo by Anthony Richards)

However, the storefront is small and very basic with the focus remaining on the pharmacy.

“We have some pretty good sales, but we’re not trying to be a gift shop,” Shields Hayes said. “We’re a pharmacy with some perks.”

Shields Hayes has never gotten side tracked or lost focus on why she became a pharmacist in the first place. The needs of her customers are always near the top of her mind.

“We try to know all of our customers by name,” Shields Hayes said. “Most of the time they can walk in the door, and we’re already pulling their stuff [prescription] out and getting it ready for them by the time they even get to the counter.”

The cost of medicine can be expensive not only for the customers of Thorsby Drugs, also the business itself. It can be a challenge balancing all the various types of insurance policies that customers have.

By CAROLINE CARMICHAEL / Staff Writer It was no typical school day at Jemison High School on March 23. The entire... read more