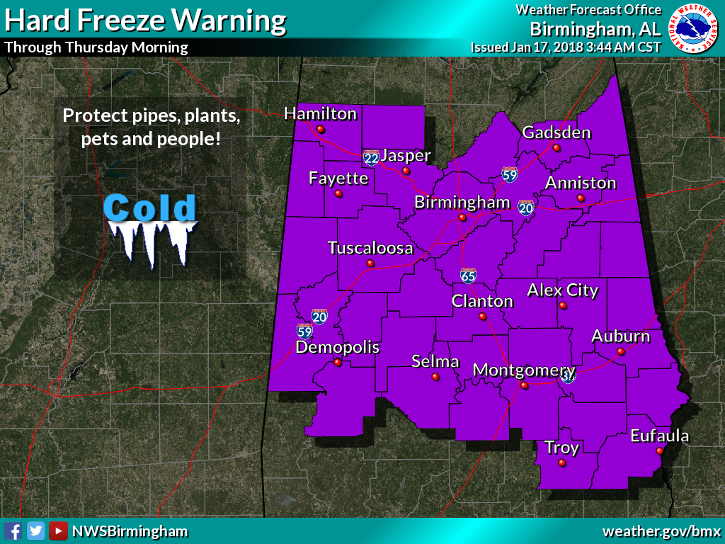 NWS Birmingham forecast a hard freeze until 9 a.m. Jan. 18. Temperatures are expected to rise on Jan. 18 to the lower 40s in the afternoon. (Contributed)

After two days of weather advisories urging residents to stay in their homes, cabin fevers across Chilton County may finally break on Jan. 18, due to reports of warming temperatures.

“By [Jan. 18] afternoon, I think everything should be hopefully clear,” Meteorologist Meredith Wyatt of the National Weather Service (NWS) Birmingham said.

Temperatures dropped to about 17 degrees the night of Jan. 17 have led to an extension of the hard freeze warning for Central Alabama until 9 a.m. Jan. 18.

However, NWS Birmingham reported that temperatures are expected to rise on Jan. 18 in Chilton County, passing the freezing point and reaching above 40 degrees in the afternoon.

Most businesses and all schools in the county closed Jan. 17, due to the hazardous road conditions.

As a measure of caution to drivers as ice persists on roadways, CCSO deputies will be documenting on the CCSO Facebook page key roads of concern, Shearon said.

CCSO thanks the public for all information submitted in regard to hazardous driving areas, and encourages the sharing of any further information with CCSO.

Jan. 18 will be sunny, with clear skies forecast for the night, temperatures to drop once more to “the upper teens and 20s,” according to Wyatt.

While ice is not a concern for much of Jan. 18, residents are still encouraged to continue to “definitely drip pipes to prevent any of those from busting,” according to Wyatt.

Sensitive animals and plants should be properly cared for as well.

Jan. 17 temperatures struggle to reach above freezing, at their warmest dancing between 28 and 30 degrees in the area, according to NWS Birmingham.

Wyatt said back roads are a specific concern, as many go untreated and refreezing remains a possibility.