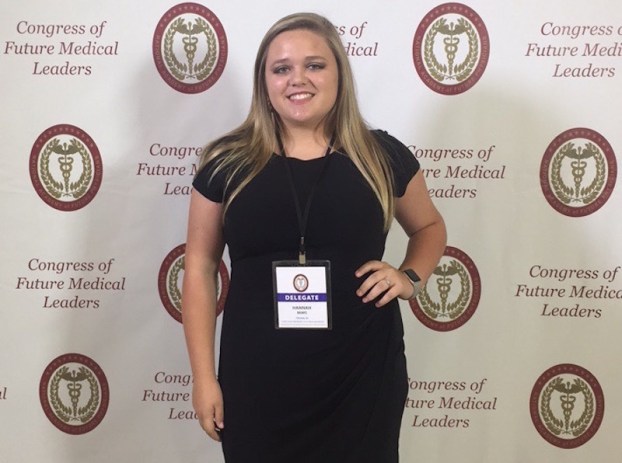 Her official certificate was presented to her at school Sept. 22 because of her participation in the Congress of Future Medical Leaders in Boston in June.

“I was blessed to be able to go,” Mims said.

Featured speakers were medical professionals and their patients. A surgeon who performed a face transplant and his patient as well as a doctor who had resuscitated a man after he was pronounced dead were some of Mims’ favorites.

She said her favorite part of the conference was the speakers talking about what they had accomplished and how they got to that point in their career.

She enjoyed hearing the different points of view.

“It really turned my life around. At first, I was like, ‘I don’t even know if I will be able to go to college,'” Mims said.

After attending the conference, she has a better idea of how to make it happen.

Mims said she was encouraged to get involved with school clubs and to get good grades to receive scholarships.

“Now, I’m the reporter for the FCCLA and I’m in Key Club,” Mims said

She is also a member of the Upward Bound program at University of Montevallo. The program gives students an opportunity to experience college life and college during the summer while in high school. Mims said she also attends classes on the campus three days a month

Mims said the program focuses on students like her whose parents did not attend college, and helps them get scholarships

As a ninth-grade student, Mims completed a profile on the Alabama Career Planning System about what she might be interested in studying.

Mims wants to be an anesthesiologist or a neonatal nurse.

After completing the profile, she started receiving information in the mail from different colleges inviting her to come visit their campus.  Then, she received a letter stating she had been selected to attend the Congress of Future Medical Leaders in Boston.

Mims said at first, she was not sure she would be able to make the trip. Mims said her father Johnathan Mims drove her 19 and a half hours so she could participate.

“I get there, and there are kids elected from all over,” Mims said.

She said the leaders of the conference made a point to know each of = students that attended.

“It was really nice. I really loved it,” Mims said.

On the way back to Alabama, Mims and her father visited the Statue of Liberty

Mims said since returning from Boston, she has continued to receive information in the mail from medical programs, including a medically-focused high school in Mobile.