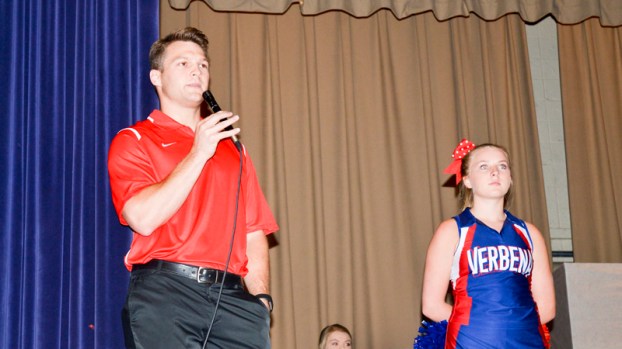 Tyler Kelley was introduced as Verbena’s varsity head football coach during a ceremony of June 16. (Photo by Anthony Richards)

For the first time in 14 years Verbena has a new football coach, and it is one of their own.

Tyler Kelley was named the school’s new varsity head coach on Friday during a meet and greet in the auditorium. The decision was made official at a school board meeting on June 13.

The hire comes after Mike Harris’ departure after 14 seasons at the helm. During his tenure the Red Devils’ program continued to take steps forward and made the playoffs each of the past two years.

“They had a great group of kids that came through here, and there’s still a lot of great athletes and kids here that will look to continue and even better that,” Kelley said. “I am coming into a great situation and I can’t wait to get things rolling.”

Kelley understands better than most of the importance that Harris has meant to the football and athletic programs as a whole, having played for him.

“I’ve got a great deal of respect for him and you won’t find a better man than that,” Kelley said. “Coming in and filling his shoes is going to be a tough thing.”David Sneed

It is a homecoming of sorts for Kelley who graduated from Verbena in 2008 and played running back at Troy University. He has spent the last couple of years as an assistant at Billingsley.

A banner hanging behind the stage read “Welcome home coach Kelley” and expressed the mood of everyone present at the event.

“I always planned on coming back here, but it just happened a lot sooner than I thought it would,” Kelley said.

The cheerleading squad performed a routine that was followed by a few words from principal Todd Davis as he introduced Kelley to the crowd. Afterward Kelley went down and interacted with those in attendance.

“It’s huge because it is something that gets the community together and shows the kids that people value what they are doing,” Kelley said.

According to Kelley, a broad goal is to be a team that is respected and striving to be one of the best.

“I want us to get back to a more ball control type of offense with great sound defense,” Kelley said. “I feel like the personnel we have here is great for that.”

Kelley plans to keep the schedule that Harris had in place throughout the summer, which consists of three days a week for about two hours a day.

“We’ve got new offensive and defensive systems that we’ve got to start installing as soon as we can,” Kelley said.

According to Kelley, he has high hopes for the group of seniors as leaders based off of the ones that he has already met and what Harris has told him about them.

“They are what the team is going to be built around,” Kelley said.

David Sneed and Robbie Sauers will also be added to the coaching staff for next season along with the return of Scott Doss.

Kelley will also be the head coach of the varsity baseball team.

Verbena fans will have a pair of football players to follow in college over the next couple of years, after... read more