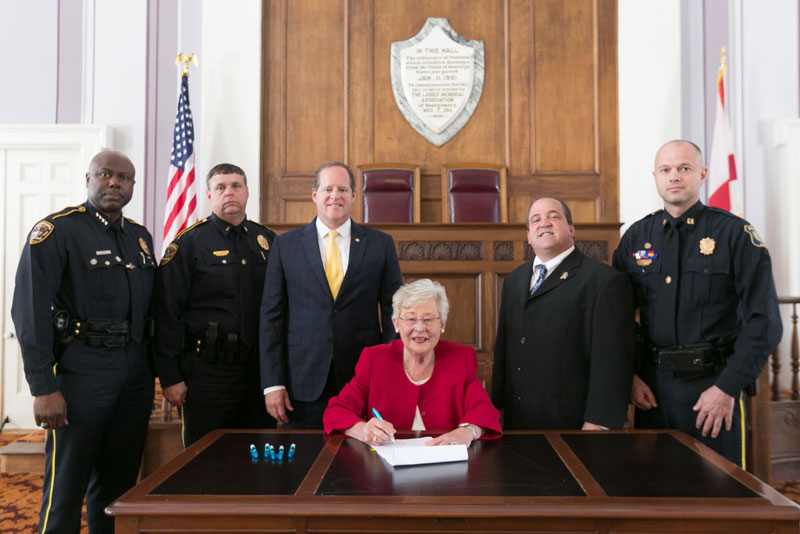 Gov. Kay Ivey and Sen. Cam Ward welcomed members of the Alabama law enforcement community to the State Capitol on May 10 for the signing of a Senate Joint Resolution creating the Alabama Task Force on Railway Safety.

“I would like to thank Sen. Cam Ward for sponsoring this very important resolution. We can now get to work with our railway partners and work on several critical issues in our state,” said Neil Fetner, Captain of the Clanton Police Department and Alabama Association of Chiefs of Police (AACOP) Legislative Committee Co-Chair.

The Railway Safety Task Force will be comprised of a seventeen-member panel from various state and local agencies across Alabama. The task force will study the impact of railway transportation in the state and will work to identify areas where improvements can be made in the interest of public safety.

Two of the primary focuses of the task force will be the transport of hazardous materials and the routine blocking of rail crossings in metropolitan areas. It is the goal of the task force to identify ways to work with railway partners without penalizing citizens.

Sheriff Wally Olson of the Alabama Sheriff’s Association and Chief Tommie Reese of the AACOP headed the law enforcement delegation. AACOP Executive Director Adrian Bramblett, Chief Marlos Walker of the Ozark Police Department, Lt. Rex Flowers of the Demopolis Police Department and Fetner participated in the ceremonial signing which was held in the Old House Chamber at the Alabama Capitol.

Ivey presented each member of the law enforcement delegation with an ink pen used during the signing of the railway safety resolution.