John Michael Brown, Jr., 26, was sentenced on May 10 to 15 years in prison for electronic solicitation and traveling to meet a child for an unlawful sex act. 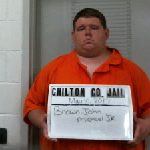 Brown is serving his sentence in the Chilton County Jail without bond.

Jemison police arrested Brown in 2014 as the result of an undercover operation. Police had received information that Brown could have been attempting to entice a child for sexual acts.

Investigators arranged via text messages to meet Brown in what he thought would be a meeting with a 14-year-old child. Instead, he was met by JPD officers and arrested.

“This guy was a danger to our kids in this perspective, and I am very pleased that justice has been served,” Jemison Police Chief Shane Fulmer wrote in an email.

Brown pleaded guilty to the two charges on April 17. Traveling to meet a child for an unlawful sex act is a Class A felony. Electronic solicitation of a child is a Class B felony.