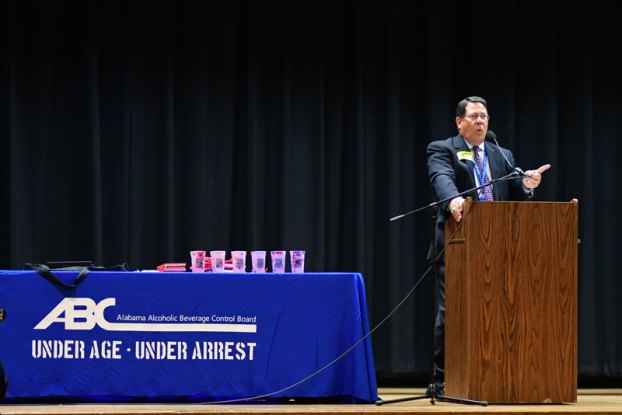 Dean Argo shares statistics about underage drinking and its harmful effects at the “Under Age, Under Arrest” program at Jemison High School on April 12. (Photo by Steven Calhoun)

The Alabama Alcoholic Beverage Control Board presented its “Under Age, Under Arrest” program at Jemison High School on April 12.

The school’s prom is this weekend, and administrators wanted to warn students of the dangers of underage drinking and driving under the influence.

“We want you to have successful, long, happy lives,” ABC board member Dean Argo said. “The information today is a heads-up.”

The guest speaker was Bethany Chancellor, a Jemison native who lost her husband in an accident caused by a drunk driver in 2014. Chancellor and her oldest son were also in the car and were severely injured. They still face challenges due to the injuries they sustained that day.

Chancellor also shared the story of the man who hit her and her family. She said he is serving a 20-year sentence and has a child of his own who was born while he was in prison.

“It’s not just my family that’s been impacted,” Chancellor said. “I want you all to think about that when you go out this weekend.”

Speakers from law enforcement and the judicial system shared statistics on the abuse of alcohol and shared experiences they have had notifying families of deaths, sentencing young people to prison and arriving on scenes of accidents caused by bad decisions involving alcohol.

By STEVEN CALHOUN/Staff Writer Jemison Intermediate and Elementary schools are raising money to implement robotics and automation into the students’... read more