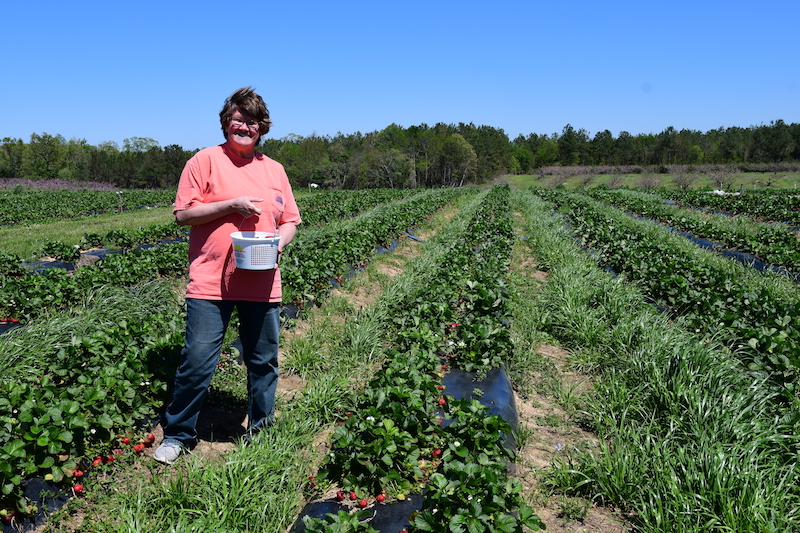 Sunshine Farms is the oldest strawberry patch in Chilton County.

Jimmy Durbin said his family started the strawberry patch at its current location 21 years ago.

Strawberries had been grown sporadically in Chilton County in the past, but Durbin said these were smaller varieties than what is offered now. Durbin’s father had a small strawberry patch near Interstate 65 for two years back in the ’50s.

There are a lot more berry patches in the county now than there were then. Today, camarosa is the strawberry variety of choice because of the flavor and ability to stay ripe. Tim Minor, Durbin’s stepson, now owns Sunshine Farms.

The U-Pick has had a variety of visitors through the years.

“We’ve pulled people even all the way from Pensacola even to come pick berries,” Durbin said.

The patch has always given the option for people to pick their own.

“Now we pick a lot of them for people that don’t want to pick them,” Durbin said.

The number of berries that will fit in a bucket varies because of the wide variety in the sizes of a strawberries. Durbin said Sunshine Farms uses a gallon size bucket ($9 for U-Pick; $12 for pre-picked).

“We don’t use any fungicides or insecticides that is harmful to people,” Durbin said.

As a precaution, only a portion of a field is sprayed at a time, and then not picked until several days later.

This year’s crop has come in a few weeks earlier than normal.

“Usually you plant these berry plants in the last of September, first of October, they’ll grow a little bit and then they’ll go dormant, when the cold weather sets in, but this year it stayed warm,” Durbin said. “They didn’t really go dormant until later when it started getting cold, that’s one reason they came in earlier too, when it started warming up early, they started to bloom early.”

Sunshine Farms is located at 11728 County Road 37 in Clanton.