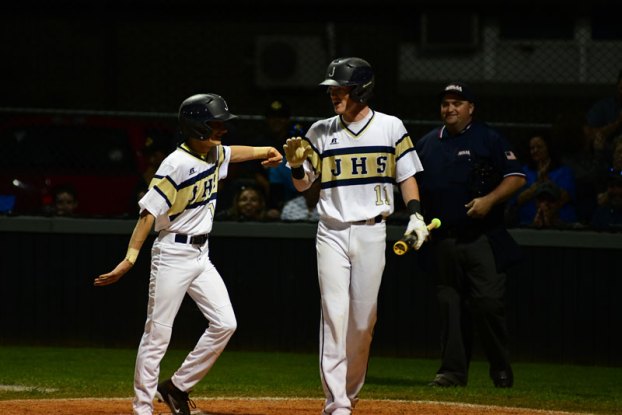 Seniors Joshua Morris and Will Johns celebrate Morris’ in-the-park homerun at the start of senior night on April 10. (Photo by Steven Calhoun)

The Jemison varsity baseball team had its senior night at its last home game on April 10 against Isabella.

Jemison opened the game strong with a quick three-up, three-down inning against Isabella.

Then, the Panthers had their biggest offensive inning of the night in the bottom of the first.

Senior Joshua “Juicy J” Morris made his debut at the plate and hit a pitch from senior teammate Bailey Sammons, then proceeded around the bases for a spectacular in-the-park homerun.

The team greeted him at home plate and celebrated along with the fans.

Then, the Panthers suffered two quick outs. The momentum swung when senior Will Johns scored on a wild pitch after advancing on senior Hunter Hood’s ground out.

After the run, senior Zachary Deason and Austin Chapman advanced on walks. Then, Adrian Jackson sent a hard ground ball to the shortstop and advanced on an error, sending Deason home for Jemison’s second run with two outs on the board.

Camden Phillips kept the momentum alive by sending a line drive to center field to bring Chapman home. The next bat was a strikeout, bringing on the top of the second with Isabella trailing 3-0.

Jemison quickly got three outs in the second before tacking on another run in the bottom half when Lawson Payton scored on a single by Hood.

The next three and a half innings were unproductive for either team. Then, after an error and two walks in the bottom of the sixth, the bases were loaded for the Panthers. Johns popped a fly ball to center field to bring Philips home for his second run of the night, making the lead 5-0.

The Mustangs scored one run in the top of the seventh, but Jemison quickly regained their footing and snagged the last out to close the game at 5-1 and give the seniors a win for their last home game.

“They went out with a win, but you hate to see them go,” Jemison Coach Phillip Easterling said. “I wish them well. They’ll be successful.”

By Brandon Sumrall | Special to the Advertiser The Jemison Panthers varsity baseball team suffered what will be a season-ending... read more