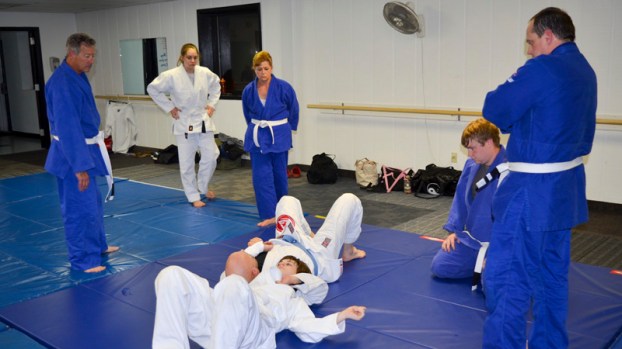 Leon Slappey demonstrates jujitsu technique as members of a jujitsu class at the YMCA of Chilton County observe on April 4. (Photo by Anthony Richards)

The YMCA now offers three forms of mixed martial arts classes with the implementation of a jujitsu class about a month ago.

The class is designed for children and adults ages 12 and up and is taught at a beginner’s level.

According to Sean Gilham, owner of Impact Martial Arts in Pelham, those interested can sign up for the class at any time, and he believes that the interest for mixed martial arts is strong in Chilton County.

Leon Slappey is the instructor for the course and comes down from Pelham to teach the material. He is a blue belt in the style of jujitsu and has been teaching for about four years.

According to Slappey, the average black belt in jujitsu is a 10-year process.

“They like to call jujitsu the ego killer, because you learn how to lose over and over again and that doesn’t change for a very long time,” Slappey said. “Once you get past that and realize that you’re just here to get better, it gives you a huge positive on life.”

Unlike other variations of mixed martial arts, such as taekwondo and kali also offered at the YMCA of Chilton County, jujitsu takes place on the ground as opposed to facing an opponent standing up.

There is a lot of fitness that is required with it, Gilham said.

One of the advantages of learning jujitsu is the ability that a person of smaller stature has to defeat someone that would otherwise be more overpowering by using proper technique and leverage.

“For most people, the last thing you want to do is go to the ground,” Gilham said. “It can be an uncomfortable place to be. Students will get to see it used for both defense and sports sides.”

Brazilian jujitsu has a deep background in the competitive ranks of UFC and MMA.

“It has become a big thing,” Gilham said. “Every fighter has it as part of their arsenal.”

A monthly fee is required with a discounted rate for members of the YMCA. The first week is free.

“It is a pretty interesting environment and culture,” Slappey said. “It has a lot of respect for sweat and hard work.”

The Chilton County Extension Office held a Growing Tomatoes 101 class at its location in downtown Clanton on April 4.... read more