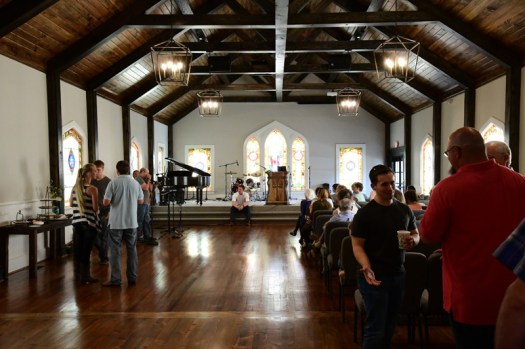 The renovated sanctuary at Grace Fellowship church at its open house on April 2. 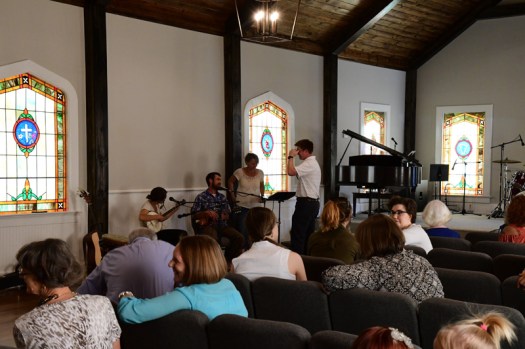 Visitors admire the new style and added space in the sanctuary as they mingle and enjoy music. 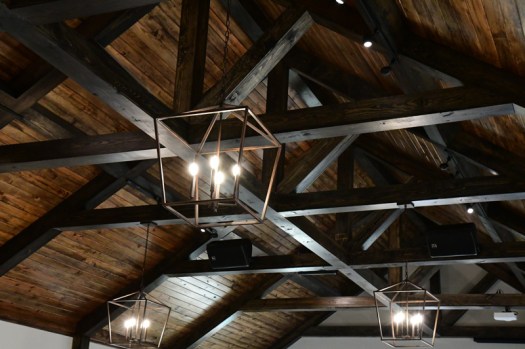 Vaulted ceilings and rustic light fixtures hang above the congregation. 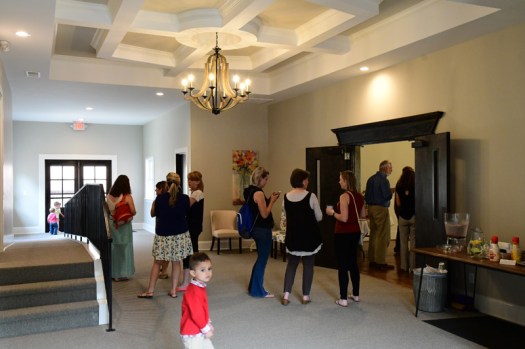 The space between the nurseries and main sanctuary has been converted from a breezeway into a lobby.

Grace Fellowship Church in Clanton recently completed renovations to its sanctuary and held its first service on April 2.

The renovations included restoring the original hardwood floors, replacing the damaged ceiling with a vaulted ceiling, rotating the sanctuary and adding a lobby with restrooms between the sanctuary and the building that houses the nurseries, fellowship hall and kitchen.

“We actually started talking about expanding our sanctuary space [about] seven years ago,” the Rev. Kevin Corley said. “The need for more space during worship became apparent.”

Corley said that over the past few years, the church has raised money and bought property next to the church to move the church offices into. The church updated other aspects of the church and added a playground, all while raising money for the sanctuary renovation.

The church was ready to renovate its sanctuary around 2015 and started looking for builders. They found one, but the project kept getting delayed.

Then, in October 2016, the church changed builders and heard that their project could start on Oct. 31.

“We went from hearing nothing for almost a year to having to move out in two weeks,” Corley said.

Oct. 30, 2016 was the church’s last Sunday in the building before it was renovated. From the next week until April 2, the church met in the activity center at First United Methodist in Clanton.

“They’ve been gracious and hospitable to us, hosting us over there for all those Sundays,” Corley said.

Grace Fellowship only had to take out a small loan for its project, but most of the money was raised by the people, according to Corley.

“Everybody’s been on board, even through all the changes that the ceiling brought that we didn’t realize we were going to have to do,” Corley said.

Corley said he and the congregation look forward to meeting in the new sanctuary and inviting more people into the church.