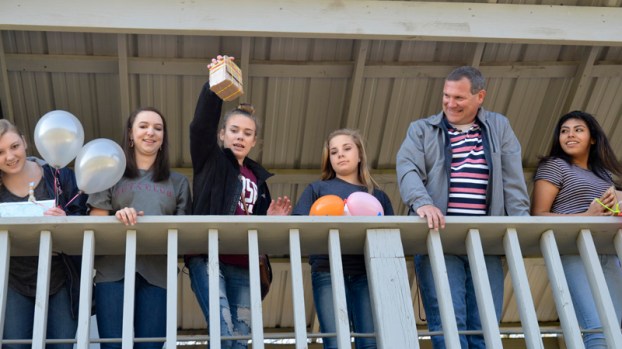 Thorsby students line up to take turns during an egg drop experiment from the top of the coaches balcony at the football field on March 23. (Photo by Anthony Richards)

Students were given a partner and were in charge of creating a design in over two weeks that would in case the egg with the goal of protecting it from cracking when dropped at a height of 14 feet.

The experiment performed from atop the coaches’ balcony at the football field.

“It was nice to get out of the classroom,” Carlee Wyatt said.

There were certain restrictions on the materials that students could use to support their egg.

It had to be a raw egg and could not be boiled or soaked in anything and the enclosure in sat in could not be bigger than a piece of paper.

Several different designs were created as a result. The students proved dedicated to the project, as much of the time constructing the projects took place outside of school hours.

Tanner Jones and Cristobal Sancheasy received tips for their design from Youtube and used Popsicle sticks as the base of its structure.

According to Jones, there was a little bit of doubt that crept in his mind prior to dropping it for the first time. Each group was given multiple attempts.

“You’re very nervous, and then afterward there is a sense of relief,” Jones said.

Each drop was timed, which will help in the next part of the project that required students to calculate the average speed and momentum.

“It was hard to mix schedules [with group], but it was good not to totally be on your own trying to figure it out,” Wood said. “It was really fun once we got into it.”

County engineer Tony Wearren informed the Commission during its March 27 meeting that the city of Clanton recently paved a... read more