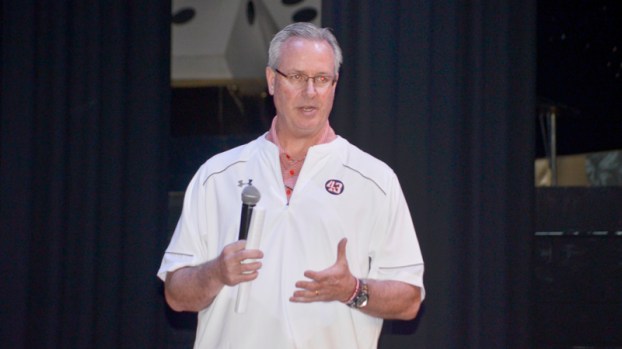 Mike Lutzenkirchen spoke to a crowd of students in the CCHS auditorium on March 22. (Photo by Anthony Richards)

This week is spring break throughout Chilton County, which is a time of fun and freedom from the regular responsibilities of schoolwork.

However, the fun times do not mean that certain decisions are void of consequences.

No one knows this better than Mike Lutzenkirchen, whose son Philip was a stand out tight end at Auburn University, but was killed in a vehicle accident in June 2014.

After the accident, Mike Lutzenkirchen began making speaking appearances throughout the country in hopes of spreading an inspirational message to various audiences.

“This message is all about realizing that you can make a difference in this world,” Lutzenkirchen expressed to the audience.

The event took place in the Chilton County High School auditorium on March 22, with a crowd consisting of students from CCHS, Jemison High School, Thorsby High School, as well as Clanton Middle School.

The backdrop of the discussion was that of Philip Lutzenkirchen and about who he was as a person and the legacy that he left behind.

“This is more than just about drinking and driving or wearing a seat belt,” Lutzenkirchen said. “It’s a story of life.”

Mike Lutzenkirchen presented the challenge to every one in attendance to search the definition of a “mentor” when they got home that night.

He also shared his email address and let everyone know that it is an available outlet to help talk things through.

Philip Lutzenkirchen is most rememebered as a key cog on Auburn’s 2010 nation title team, but he was also a three-time All-SEC Academic selection.

“Everything comes down to decision making,” Lutzenkirchen said.

According to Lutzenkirchen, he could see an abundance of talent just by looking out into the crowd in the auditorium, but talent will only be on display if the right choices are made in life.

Spending time with those in need was something that Philip Lutzenkirchen took pride in, and Mike Lutzenkirchen shared a story of when his son came home during spring break to meet a girl that was battling cancer after he found out that he was her favorite player.

The entire auditorium went dead silent at certain times throughout the presentation, especially when Lutzenkirchen shared that the temperature when he got in his van this morning read 43 degrees, his son’s jersey number.

According to Lutzenkirchen, he continues to receive signs like that and it reaffirmed that he was meant to be there that day giving the speech to students in Chilton County.

“What legacy are you leaving,” Lutzenkirchen asked.

Hopefully this spring break is fun and students consider Lutzenkirchen’s message if faced with a tough decision during that time.

The Thorsby FFA’s 2017 t-shirt design has been voted as the best among FFA chapters following a nationwide contest. This... read more