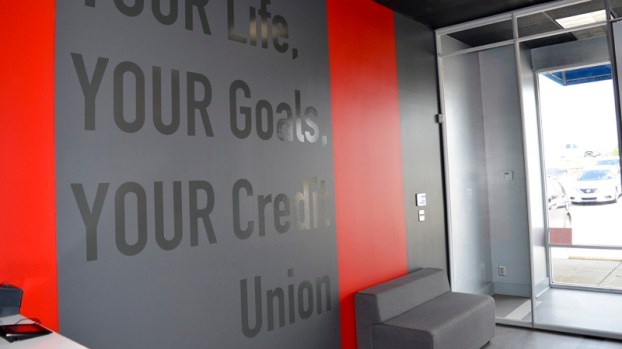 The entrance of the newest ASE location, which will open April 3 in Clanton. (Photo by Anthony Richards)

Credit union to open in Clanton

ASE Credit Union will officially open the doors to its newest location in Clanton on April 3 and will be followed by a ribbon cutting ceremony on April 6.

The location will be in the shopping center at 1400 Woodfin Lane off of U.S. 31 in Clanton across from Chilton County High School.

According to CEO Jared Freeman, the move to Clanton was a logical choice for the company, with a strong base of current and retired state employees in the area.

“We were primarily created to serve state employees of Alabama, but now we’re open to any and everyone,” Freeman said.

Other factors considered when deciding on a location include housing growth, population growth and economic growth.

“We noticed that there is a natural trend south from Birmingham and a natural trend north from Montgomery,” Freeman said. “We saw that in the next five years, Clanton is primed to be a big center of growth. We wanted to get here before everybody else does.”

Four full-time employees with over 40 years of combined experience in the industry will make up the ASE staff, each of which call Clanton their home.

“People in this town believe in doing business with people that they know and trust,” branch manager Tiffany Wilson said. “They will see a familiar face each time they come in.”

“It’s going to be a little different than traditional banking, and we did that on purpose,” Freeman said. “We feel like those are a little more retail store hours in general.”

By closing at 6 p.m., it should create some ease for those who have to worry about balancing when they get off work and when the bank closes.

“We want to be convenient for when members actually want to come do business with us,” Freeman said.

ASE has been around 63 years and is based out of Montgomery. Preparation has been taking place since December on what will be the company’s seventh location, all in the state of Alabama.

The difference between Credit Unions and banks is that Credit Unions are considered not-for-profit organizations and are member-owned financial institutions.

As a result, Credit Unions refer to their clientele as members instead of customers.

“I think it is very exciting for a new financial institution to come to this town,” Wilson said. “The look and feel is very different than anything this county has seen.”

Gardens named among top in state