Clanton native Alvin “Dangerous” Davis is at it again and in preparation for another title shot with Golden MMA Championships as the promoter.

The fight will take place at the Aviator Sport Center in Brooklyn, N.Y. beginning at 7 p.m. on March 24 and will have a catch weight of 165 pounds.

His opponent will be fellow amateur MMA fighter Ryan Castro from Suffolk County, N.Y. with a record of 5-4 and a former champion in KTFO Fights based out of New York.

The state of New York was sanctioned to hold MMA fights after lawmakers passed the decision in May 2016.

“I’ve never been very submissive,” Davis said. “When I see a challenge, I’m going to find a way to make it happen. This is not a game to me, it’s life.”

He got a late start on the mixed martial arts scene, after originally taking up boxing at the age of 17 and serving a brief stint in the military.

Now 31 years old, Davis looks to put his name on the map, as he continues along the path to one day turning professional.

“I always had that voice in the back of my head, that there was something God wanted me to do,” Davis said. “I found my niche, and that question mark had been answered.”

According to Davis, he prides himself in being a well-rounded fighter and feels confident in striking and wrestling ability. 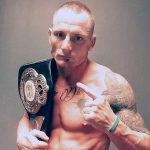 Alvin Davis of Clanton is preparing for a title fight against Ryan Castro in Brooklyn, N.Y. on March 24.

However, his boxing background makes him excel at finishing fights while standing up and facing his opponent.

Davis has a record of 5-5, winning fights by both knockout and decision.

“He [Castro] better be ready, because I feel explosive and I’m itching to go,” Davis said. “I feel mentality stronger than I ever have in my life.”

He credits his family, which includes Brittany his wife and their five children, for providing him with the drive to train and continue to search for greatness.

Training includes waking up at 6:30 a.m. and as soon as he drops his kids off at school, he runs a mile before heading to the gym for some strength and conditioning.

Davis does not take a day off from training, even on the weekends.

“My wife is my biggest supporter,” Davis said. “I know it’s got to be tough on her at times, but she makes it look so easy.”

By STEVEN CALHOUN/Staff Writer Jemison renovated the softball field in the city park for Jemison Middle School to use during... read more