The Chilton County Sheriff’s Office arrested Jeffery Seagle on Feb. 27 for his alleged failure to register his address as a sex offender and for living in a prohibited location. 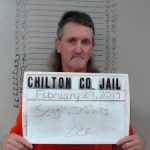 Seagle was reportedly living within 50 feet of the Thorsby School football field. Investigator Derrick Bone with CCSO had received information that Seagle was living on South Dakota Avenue in Thorsby and went to confirm this tip.

Bone discovered that Seagle was living in the apartments on South Dakota Avenue and arrested him.

According to a press release, Seagle is a registered sex offender with the Autauga County Sheriff’s Office for sexual abuse and rape of an 11-year-old female.

Sheriff John Shearon thanks the Thorsby Police Department and the public that passed on information about Seagle.

Shearon encourages citizens to visit chiltoncountyso.org to access the list of sex offenders living in Chilton County. Call 205-755-4698 with any tips in reference to sex offenders.

By STEVEN CALHOUN/Staff Writer The Jemison Police Department will start its Citizen Academy on March 7. For those who have... read more