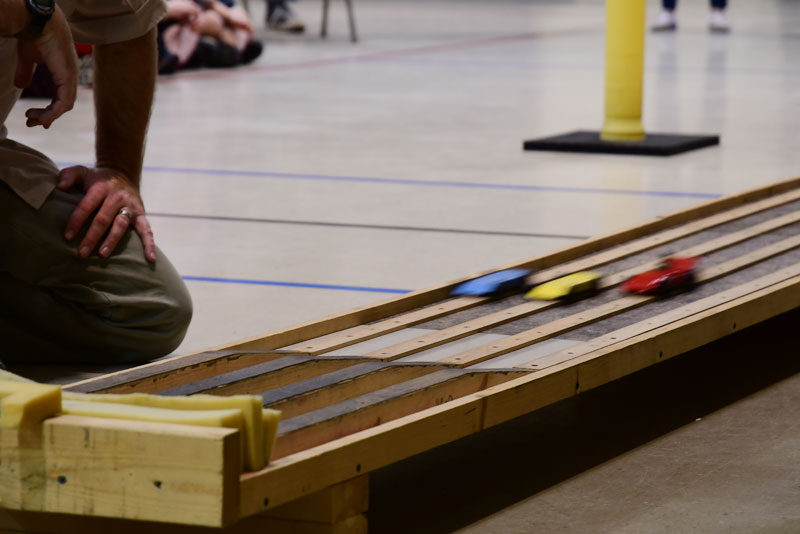 The Pinewood Derby on Feb. 25 pitted scouts from each den of Pack 57 in friendly competition with each other.(Photo by Steven Calhoun)

Scouts and their parents formed a semi-circle around the long, sloped wooden track. Cub Scouts had worked to build their small wooden cars from kits consisting of a block of wood and a wheel assembly. They shaped and decorated the cars however they liked, as long as the cars could move along the track, use the original wheels and axles and meet a weight requirement.

On race day, the children gathered around the track to watch the spectacle as den leaders judged at the finish line. Some cheered and some sighed in defeat as their cars either advanced or lagged behind the competition. 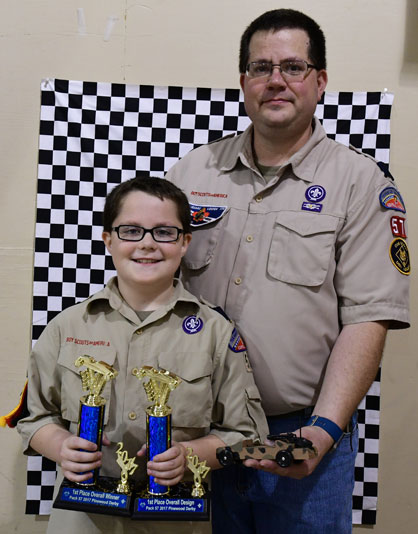 “The main benefit is having fun, but they do learn sportsmanship, they do learn about design and about doing a job,” committee member Robert Johnson said. “They also learn that there’s going to be winners and losers … it’s a good life lesson for them.”

Johnson was a scout before they started doing the Pinewood Derby or camping. He said the program used to do fewer activities outside the home, but he likes the growth that scouting has undergone since he joined the organization.

“It’s a tremendous amount of change in Cub Scouts. I think it’s great because it gives [them] a lot more opportunity to see things, to learn things, to get out in their neighborhood,” Johnson said. “Fun with a purpose is what we like to call it.”

After the competition, the scouts ate pizza together and socialized.

The Cub Scouts welcome new members throughout the year. Contact Hope Falotico at 478-494-9681 for more information about joining the Cub Scouts.

To raise funds, the scouts are selling discount cards. These include discounts such as $10 off a $50 purchase at Russell’s Do It Center. To purchase, call 755-1504 or visit C&C Trophy.