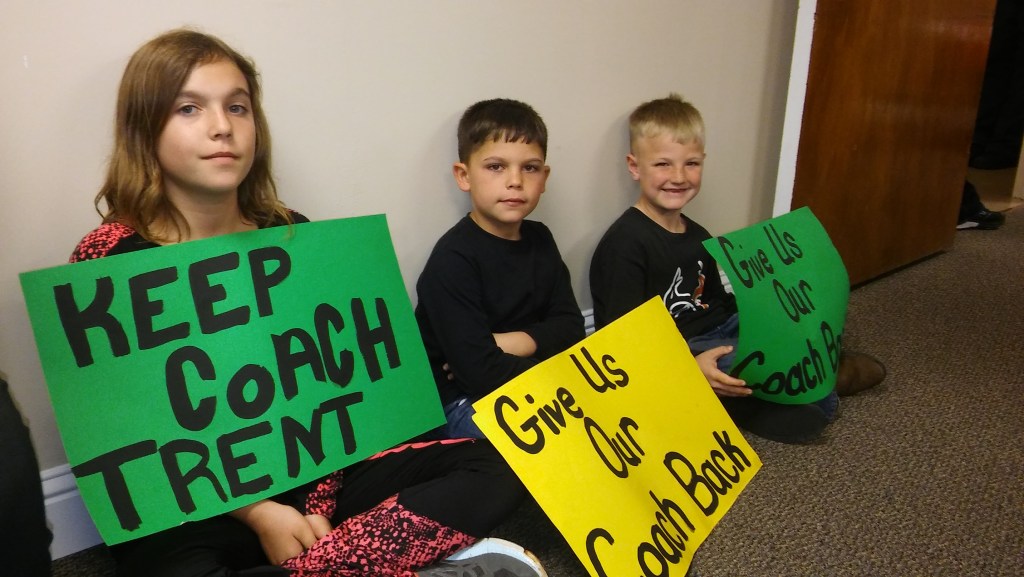 Students hold signs in support of Trent Cox during the Chilton County Board of Education meeting. (JOYANNA LOVE/ ADVERTISER)

It was a packed house at the Feb. 21 meeting of the Chilton County Board of Education as several members of the Isabella community came out to show their support for the approval of Trent Cox as an Isabella High School volunteer softball coach.

Some held signs, while others sported T-shirts asking for Cox to be approved.

Applause filled the room at the end of the meeting, during which the board approved Cox for the position in a 5 to 1 vote. Board member Joe Mims voted against the motion, saying he had some concerns, which were not discussed during the meeting.

At the Feb. 2 meeting, Cox’s name had been removed at the request of Mims from a list of potential volunteer coaches being voted on.

The board had discussed the issue during an executive session before the name was removed.

“We believe that his removal was based on vengeful, false information made against his good name and character,” Katrina FJeldstad, who has two daughters on the Isabella softball team, said during the Feb. 21 meeting. “We are here to let you know that we are highly displeased with this action.”

FJeldstad said many of the girls on the team have played under Cox for several years.

“Cox is a knowledgeable, caring coach, who devotes his time and effort to all things softball,” FJeldstad said.

She said Cox has helped his players develop integrity, as well as softball skills.

“I would unequivocally and wholeheartedly trust him with all of my children in any situation, on and off the field,” FJeldstad said.

Cox did not coach at Isabella last year.

A petition of 358 names in support of Cox was presented to the board.
Isabella principal Rick Porter had resubmitted Cox’s name for reconsideration, and it was added to the list of potential volunteer coaches being considered before the meeting.

“We just don’t have funding to supplement (pay) every single coach,” Board president Lori Patterson said.

Mims declined to comment further on his vote when asked after the meeting.

Other volunteer coaches approved during the meeting included: Jason Baugh for track at Chilton County High School, Holly Watts for softball at Clanton Middle School and Shonda Copen as a cheerleader sponsor at Jemison Middle School.

Ashlin Castleberry resigned as the cheerleader sponsor at Jemison Middle School in January.