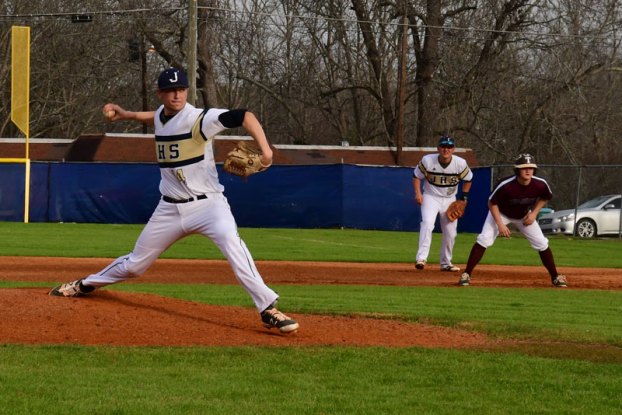 Christian Hood (No. 14) sends heat towards a Thorsby batter in the Feb. 20 season opener.(Photo by Steven Calhoun)

Jemison defeated Thorsby at home in the season opener on Feb. 20 by a final score of 4-0.

The game opened slowly as the teams warmed up and got a feel for the pitches.

A caught pop-fly and out at first by Jemison made a double play to put a stop to Thorsby’s momentum after a walk early in the third inning.

In the fourth, Thorsby started to find a rhythm and make solid contact. Robert Blankenship caught a piece but was out at first, then Christopher Jones hit a double and put more pressure on Jemison pitcher Christian Hood.

Hood responded by striking out the next batter, leading Jemison into the bottom of the fifth, where they found success at the plate.

Jemison’s Zachary Deason hit a triple on a pitch from Thorsby’s James Sellers. Then Austin Chapman brough Deason home with a single, followed by another single from Kendall Payton.

Then, Camden Phillips bunted and was hit with the ball outside the running lane, resulting in an out. This still gave Chapman and Payton a chance to advance to third and second.

With two on base and two outs in the bottom of the fifth, Ryan Smith hit a single and brought Chapman and Payton home for the Panthers. This established a three-run lead and put the Rebels on their heels.

Thorsby came out swinging in the sixth, hoping to respond with runs, but had no such luck. Jemison shut them down by catching a fly ball and getting two outs at first.

In the bottom of the sixth, Will Johns tacked on one more run by stealing his way around the bases after a single.

Thorsby took their last chance at bat and got to first on all three batters, but could not make it around the diamond, closing the game at 4-0 in Jemison’s favor.

Coach J Ellison attributed the win to extra defensive practice before the season and a strong short game.

“We had a very productive bottom of the lineup, and that’s what we wanted,” Ellison said.

The Thorsby Rebels fell short of a return trip to the sub-regionals following a 67-61 loss to at home to... read more