Patients say thanks to Driggars 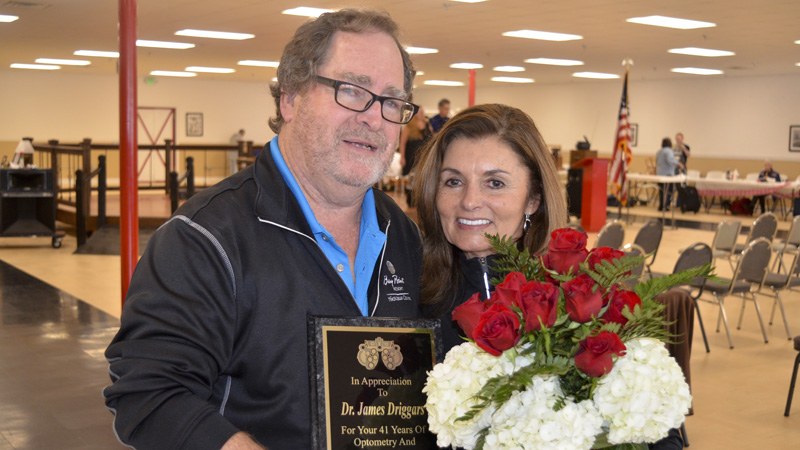 Jim and Brenda Driggars were recipients of a plaque and flowers during a retirement lunch at Senior Connection on Feb. 8. (Photo by Anthony Richards)

After 41 years serving the Clanton community as an optometrist, Dr. Jim Driggars decided the time was right to retire from the profession.

A retirement lunch was held on Wednesday, Feb. 8 at Senior Connection, and gave the opportunity for patients of Driggars to give a collective thank you.

“When people are appreciative of what you’ve done, there’s no greater compliment,” Driggars said. “Just by sitting in your chair, they are showing that they have confidence in you. I ‘m a believer that things work the way that they’re supposed to.”

Driggars began his practice in Clanton in 1976, and felt right at home from day one.

“I met some of the greatest men during my time in the Lions Club,” Driggars said. “I’ve been fortunate to be part of a community that accepted me as a stranger. You gave me a sense of belonging.”

According to Driggars, the amount of knowledge in the medical field is nearly doubling every three years due to continued improvement in technology. It can be difficult to keep up with, but was also one of the things that he enjoyed most.

“The biggest advancement in the last 40 years, is that macular degeneration used to be something that people went blind from, and now we can take care of the majority of that,” Driggars said.

However, he also warned that though technology is great, the medical field must never lose site of the patient.

“The only drawback is if you start thinking of the patient as a number instead of a person,” Driggars said. “We have to keep the connection between the doctor and the patient, because if we ever lose that, we’ve lost everything.”

The relationships and interactions that he has developed with his patients is the aspect of the job that he will miss most.

“Some of the patients have become my friends and even some of my really close friends,” Driggars said. “That’s something that money can’t buy.”