Isabella earned a chance to play for the county title with a hard-fought 51-48 win over Thorsby in the semifinals on Thursday, Jan. 5.

Thorsby opened up a 21-17 lead at halftime, which was quickly evaporated early in the third quarter by the Mustangs.

However, the game remained evenly matched and both teams traded big plays in an epic fourth quarter.

“They were playing zone the whole night and we just tried to attack the gaps,” Isabella head coach Jared Day said. “That’s where most of our scoring comes from.” 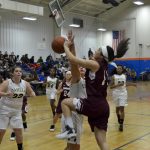 Isabella’s Hailey Underwood (No. 1) blocks a shot attempt by Thorsby’s Lilly Barnett (No. 11) during the semifinals on Jan. 5. (Photo by Anthony Richards)

The guard combo proved the key to victory by accounting for all but three of Isabella’s 19 points in the final quarter of play, including a scramble play in which Chattman gathered an offensive rebound and kicked out to a wide open Ford for three points to give the Mustangs a 43-40 lead.

“We turned up our pressure there toward the end and that’s what really helped us get the lead,” Day said.

However, Thorsby was not done and Carlee Wyatt stepped up and drained a 3-pointer from the right wing and tied the game at 47-all in the process.

But just as the Mustangs had done all game, they did not stay down for long, as Chattman took the ball up the court and drove in for a layup to put the Isabella back on top 49-47.

Chattman made a pair of clutch free throws with 7.7 seconds remaining and Ford stole the ball to eliminate any chance the Rebels had of a victory.

“We struggled throughout the game to make free throws, but we made them when it counted,” Day said.

Chattman scored 20 points to lead Isabella, while Ford had 12 in the game. Emily Booth made her presence known in the paint with 10 points.

Lilly Barnett scored 16 points for the Rebels and Wyatt added 11 of her own.

The Mustangs will face Chilton County High School in the final of the county tournament on Saturday at 5 p.m.

CCHS will attempt to sweep finals

By Brandon Sumrall | Special to the Advertiser  Chilton County pulled off the clean sweep on Thursday night, as the... read more