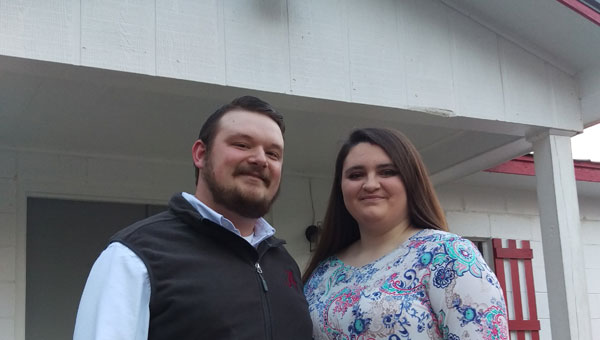 The Rev. Tyler and Ashley Strawn are the pastors of Fresh Anointing Independent Church. (Photo by Steven Calhoun)

Fresh Anointing Independent Church in Jemison will hold its first service on Sunday, Jan. 8 at 10:45 a.m.

The Rev. Tyler Strawn and his wife Ashley are Alabama natives. The Strawns have been preparing the church for its first service for about a month. The building sits on Main Street a little less than a mile south of the Jemison Fire Department.

Strawn started preaching when he was 12 years old, and was ordained when he was 15. He met his wife when he went to sing at her father’s church near Maylene. They have been married for two years now, and Fresh Anointing is their first church as senior pastors.

“I’ve had a passion for pastoring, and we both knew that was the direction God was calling us into,” Strawn said. “We heard this building was open so we came down, checked it out and decided this is where we’re going to be. God opened the door and so we’re walking through it.”

According to Strawn, the church’s pews were there when he arrived, as the building had previously been used by another church. Now, the couple is working to get a sound system installed and put the finishing touches on the interior.

The Strawns plan to have contemporary and traditional elements in their services.

“We have a mixture. We sing praise and worship, and I’m an old school preacher. We’ve got old songs as well,” Strawn said.

The group sings as a duo, and said their songs are more contemporary. The pews of the church also hold the red hymnals many churchgoers may be familiar with.

According to Strawn, he plans to have singings and cookouts at the church. He said the church would join a partnership to feed people in need at Linn Park in Birmingham, and he would like to do something with local charities, too.

“Our vision is to be a lighthouse to this community … and reach people for the kingdom [of God],” Strawn said.

Fresh Anointing Independent Church is located at 356 Main Street in Jemison. For more information, go to the church’s Facebook page.

Alabama 4-H and the Chilton County Extension Office will introduce a pair of new clubs beginning in 2017. The primary... read more