Chilton County tournament gets under way

The 2017 edition of the Chilton County Basketball Tournament tipped off on Monday night with the Thorsby Rebels grabbing a pair of victories, as the girls knocked off Verbena 49-21 and the boys defeated Isabella 71-48.

With the Rebels shooting stone cold from the floor to start the game, an early two-point basket by Jonathan Alstott kicked off a 7-0 Mustang run.

A basket from Jeremiah Bolling with 2:33 to play in the first period finally put the Rebels on the board while also starting a 7-3 run that brought the first to a close with the Mustangs leading 10-7.

Just over a minute into the second period, a free-throw from Logan Patterson tied the game at 10 and with the two teams playing through a 12-all tie, a basket from Patterson started a 14-0 Rebels run to put Thorsby out in front 26-12. 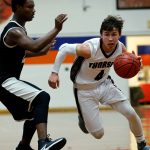 Jaqarise Stacy started the third period with a three-point basket for the Mustangs that was answered by a three from Noah Byrd for Thorsby.

A three from Cornelius Stacy and a basket from Bolling made the Rebel lead 12, but was answered by a pair baskets from Cain Niece to push Thorsby back out in front by 16.

Seven late points from Dakota Merrell pushed the Rebels even farther ahead as Thorsby finished the third with a 54-32 lead.

Merrell kept the hot hand through the early minutes of the fourth by scoring seven straight for the Rebels that were answered by a pair of threes from Cornelius and Jaqarise Stacy.

With both teams subbing deep into their bench, the Rebels cruised to a 71-48 first round win.

Merrell led the Rebels with 16 points, while Jaqarise Stacy added 15 for the Mustangs.

In the girls contest, Lilly Barnett of Thorsby led all scorers with 16 points and JaNiya White had 13 points for Verbena.

Rhonda Hardesty to retire after 18 years as district judge