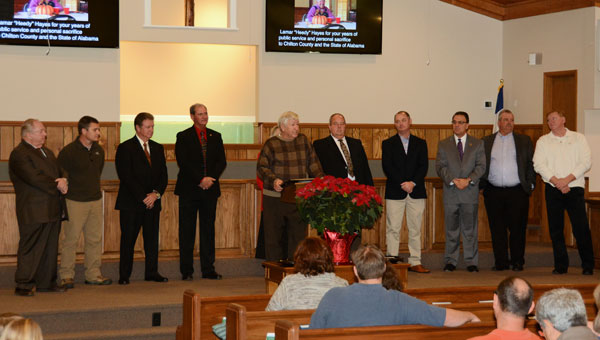 Lamar “Heedy” Hayes (at podium) was honored with a plaque and a State Senate resolution at Union Springs Baptist Church during the church’s Dec. 11 service.(Contributed)

Union Springs Baptist Church in Jemison had a special time during their Dec. 11 worship service to honor former County Commissioner Lamar “Heedy” Hayes for his 24 years of service.

The church presented him with a plaque as a token of appreciation. The verse 1 Corinthians 10:24 was written on the plaque. It reads, “No one should seek their own good, but the good of others.”

Hayes always had the good of others in mind, according to the Rev. Steve Johnson.

Johnson said Hayes has been a member of Union Springs Baptist since 1965 and has served as a deacon, Sunday school director, teacher and “almost everything down there.”

The church had a luncheon after the service where many of Hayes’ friends spoke of how great a hunting partner and friend he is.

Several of the current and former county commissioners were there for the service, as well as Judge Bobby Martin and Representative Jimmy Martin. According to Johnson, many of them shared stories of their friendship with Hayes and how they had worked together.

Rep. Martin presented Hayes with a resolution from the State Senate thanking him for his years of service.

“We think he deserves to be recognized for his hard work and dedication to the county,” Johnson said. “He’s been with us all these years and he’s served us well here on this end of the county.”

The Angel Tree gifts filled a conference room in Jemison City Hall before being taken to Jemison Middle School.(Photo by... read more