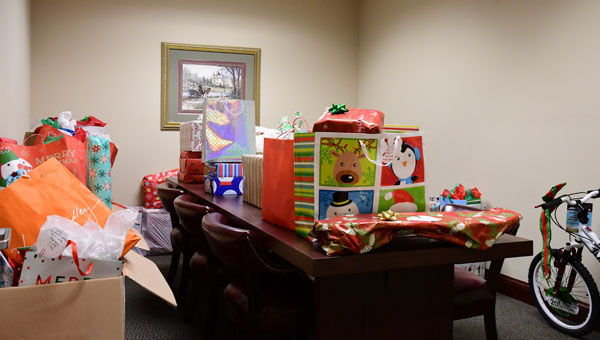 The Angel Tree gifts filled a conference room in Jemison City Hall before being taken to Jemison Middle School.(Photo by Steven Calhoun)

The city of Jemison’s Angel Tree was a great success, and the gifts were delivered to Jemison Middle School on the morning of Dec. 13.

Tammy McGriff, Jemison’s librarian, has organized the Angel Tree for three years. She puts multiple angels on the tree for each child.

“There’s at least three people buying for one child,” McGriff said. “Every year it gets bigger.”

This year, the gifts were loaded onto a van to be taken to the middle school. There were bags of clothes, boxes of toys and even a bicycle. The gifts filled the entire back of the van and many of its seats.

The Angel Tree for the city provided multiple gifts to each of the 15 sponsored children this year. Citizens from Jemison and even people who have moved away came by to sponsor a child, according to McGriff.

“A lot of these adults who buy for these children have been on an Angel Tree before,” McGriff said. “They come every year to buy more … You see all the bad in the world…but yet when this happens, it makes you appreciate it.”

McGriff said some parents let their children pick an angel and go shopping for another child. Families are often moved when they see that the children’s lists include things like socks and jackets, according to McGriff.

“It’s a community effort,” McGriff said. “As a community, it’s grown … word has spread. It just proves to me [that] it’s like someone said, ‘I know how Jemison people are. They’re loving and giving.’”

McGriff thanked Mayor Eddie Reed, those who donated gifts, the gift wrappers, the volunteers who helped load and transport the gifts and the counselor at the middle school.

“We know that [the kids are] going to be smiling and excited about it,” McGriff said.

The reason for the season

Mae Carol Sails’ “CHRISTmas cross” is a sign of what the Christmas season means to her. (Photo by Anthony Richards)... read more