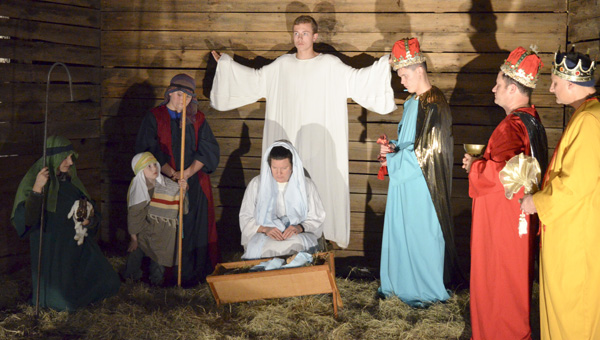 Members of the Christ Independent Methodist Church congregation and volunteers participated in a live nativity on Tuesday. (Photo by Anthony Richards)

The tradition of a live nativity started in the 1960s and has been held every year except for twice during that time, when weather forced the cancellation of the event.

“The youth workers started it, as something that all of the youth could participate in,” said Laurel Adams, nativity organizer. “It’s something special that we look forward to each year.”

According to Adams, it has become common over the years for people driving by on County Road 29 to stop and want a picture with the participants, as well as some that just want a reason to say “Merry Christmas.”

“We were so worried about rain, but it turned out to be a perfect night,” Adams said.

There are certain challenges to putting on a live nativity, especially when animals are included.

“Throughout the years we’ve had donkeys, mules and horses,” Adams said. “There are always fun memories that go along with it,” Adams said.

This year’s nativity also included goats, a cow and a bunny.

Participants in the nativity included a mix of members of the congregation at Christ Independent Methodist Church as well as volunteers.

The tradition is one that helps strengthen the relationships within the church and demonstrates the belief that the congregation has maintained over the years.

“There were a lot of us out here getting it together,” Adams said. “It’s nice to just have that time to work on something as a whole.”

Hot chocolate and coffee were available along with festive cookies, cupcakes and candy.