The 12th annual service of Lessons and Carols will be held at Resurrection Catholic Church in Clanton on Dec. 7 at 6:30 p.m.

Lessons and Carols is open to all. There will be a reception after the event for those in attendance.

The service is a longstanding tradition, going back to the 1870s in England. It consists of prayers, carols and readings from the Old and New Testaments of the Bible.

Walter Hayden, the music director at Resurrection Catholic and Trinity Episcopal Church, said the church has adapted the program to be more modern. They have changed only the carols; the readings and prayers are the same.

“I really like the meaningfulness from the time of Abraham to the birth of Christ,” Hayden said. “I like that it gives a taste of Old Testament readings. It makes the whole meaning of Christmas make sense.”

Traditionally, nine scriptures are read in the service. The verses come from Genesis, Isaiah, Luke, Matthew and John and center on the story of Jesus, from the prophesy of his coming to his birth. The prayers and carols support this theme.

Resurrection Catholic and Trinity Episcopal joined together for the program about 12 years ago, according to Hayden. He started the program and members from both congregations were in it, so they decided to partner together.

Since then, more churches have come on board, and the service has been rotated between locations every year. This year, it is Resurrection Catholic’s turn to host.

Trinity Episcopal Church, Maplesville Methodist Church and Lomax Independent Church will join them in their sanctuary at 300 First Avenue in Clanton. 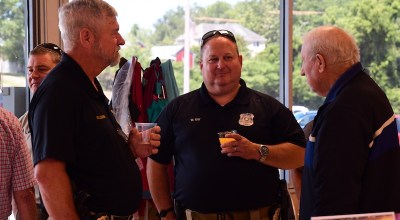