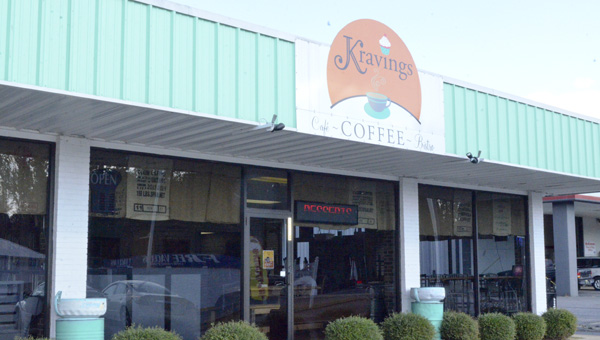 A view of Kravings before the restaurant closed on Friday. (Photo by Anthony Richards)

Kravings closed its doors on Friday, and nearly one and a half years since it opened in April 2015.

“There are several people that are disappointed. Some customers even got tears in their eyes when they heard the news,” owner Dan Wright said.

It was the fifth locally owned restaurant to close within the past month, along with Buffalo Street, Verbena Pocket Express, Side Traxx Café and Raw’s BBQ.

“It’s sad for the community to have that much loss in the course of 30 days,” Wright said.

Several circumstances led to the eventual closure of Kravings and have provided misfortune for several others local businesses over the years.

“It was just too inconsistent,” General Manager Wendy Wright said. “We’d be packed one day, but then you have four other days with only a few customers. We’ve done all kinds of things trying to pull people in from coupons to signs, but we just couldn’t seem to get enough daily business to make it work.”

However, what puzzles the Wrights is the fact that they did plenty of homework and crunched the numbers prior to opening the restaurant.

The research included looking at ALDOT before choosing a location, and an estimated 8,000 cars travel by per day on U.S. 31.

“There have been many Thursday nights that we do not have any business, and then I go up the road to Jack’s and there are seven cars in the drive thru,” Wendy Wright said.

They also asked around and found an increasing interest for a local coffee shop within the community.

“One of the biggest disappoints is the coffee sales, which did not make 25 percent of what we were conservatively projected to make,” Dan Wright said. “We disheartened, but are aimed at refocusing our efforts.”

According to Dan Wright, staffing has remained a problem since Kravings opened, with 10 to 15 percent of the applications not even fully completed.

“We as a community need to have a discussion about our workforce, if we want to grow our local economy,” Dan Wright said.

Another typical hurdle for most small businesses is the high commercial rent that is required throughout much of the city, Wendy Wright said.

Creating even more of a problem was the fact that windows lined the walls of the building, which made it difficult to heat and cool the dinning room area.

“To sum it up, our daily operating expenses exceeded our revenue,” Dan Wright said. “It hasn’t been an easy decision for us.”

The current plan is to continue making “The Wright Rub” seasoning and barbecue sauces along with catering.

“We’ve had tremendous support for that and there’s not nearly as much overhead, because all you really need is a kitchen,” Dan Wright said. “We’re not to the point of producing every day, but it’s a process.”

The recent restaurant closings, creates questions and perhaps insight into the uphill climb that awaits those looking to open a local business.