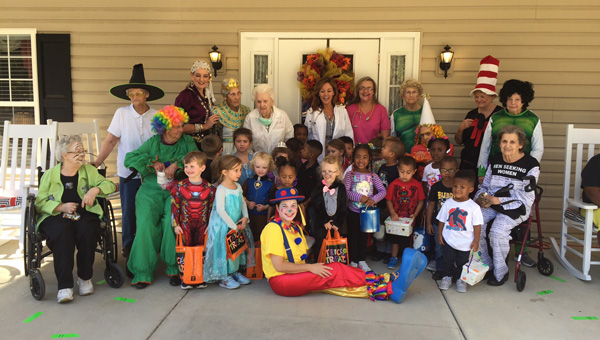 The residents at the Gardens of Clanton joined in on the Halloween festivities and proved that fun has no age limit during a holiday party held on Monday.

Each of the residents dressed up in costumes, that included the Hulk, Cat in the Hat and classics such as clowns and witches.

According to Administrator Vickie Jones, it was a carnival-like atmosphere throughout the lobby and front porch of the Gardens of Clanton with an array of games and prizes available for those participating.

The candy and prizes at the event was donated by Suncrest Home Health and SouthernCare Hospice, while Cake Addiction supplied the cupcakes.

Carrie (Kay) Miller won the costume contest at nearly 103 years old by dressing up as a Candy Corn.

“Your never too old to dress up and have fun,” Jones said. “We prove that here at Gardens at Clanton.”

West End Baptist Church Daycare and Peter Pan Daycare both came out to pay the residents a visit and provided them with some Trick-or-Treat guests of their own.