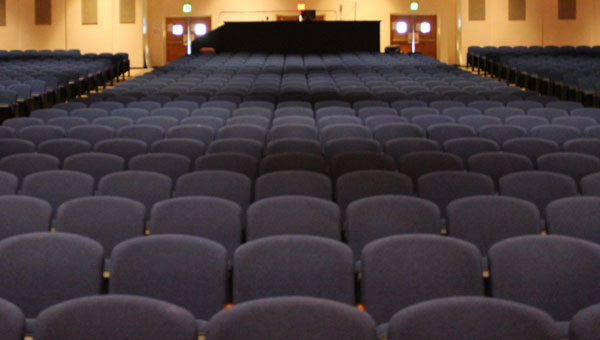 New seating in the CCHS auditorium. (Photo by Steven Calhoun)

Chilton County High School has seen many improvements recently, and has plans for more to come.

According to a press release from the school, more than $150,000 dollars was raised for the new auditorium seats, which several patrons have enjoyed at events during the summer.

Also, the back parking lot was recently paved using funds generated by former students Mason Easterling and Blake Hudson. These young men were both former SGA presidents and were committed to repaving the parking lot for CCHS students to enjoy. They raised the money through Christmas Spectacular performances and with the help of the City of Clanton. The back lot was previously a gravel parking lot with a paved strip through it; now, it is paved, lined and numbered.

Improvements that the community can see this football season include exterior upgrades to the visitor side concession stand and major landscape changes in the north end zone. According to the press release, student Riley Locke has committed to changing the CCHS letters in the end zone from holly shrubs to large rock.

The coaching staff, under the direction of Coach Brian Bradford, refurbished the coaches’ area this summer and built new lockers for the team in the summer of 2015.

The marching band will look bigger and fresher this year with new members and uniforms. The band has doubled under the direction of Matt Martindale, and the Band Boosters have had great success in their fundraising efforts. According to the press release, Representatives Jimmy Martin and Cam Ward made it possible to purchase a new, bigger band trailer to carry instruments.

CCHS will continue to celebrate its centennial year as the football team takes the field this fall. Former football players and cheerleaders will be recognized at the last game of the year on Oct. 21.

Principal Cynthia Stewart invites everyone to come out and support CCHS and all of its activities this year.