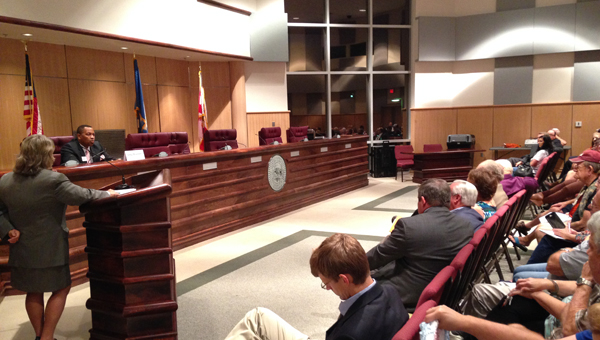 Candidates for Clanton mayor and City Council made their case to potential voters on Thursday.

A municipal election forum was held by the Chilton County Chamber of Commerce at Clanton City Hall, with close to 100 people in attendance.

The election will be held Aug. 23. All Clanton residents will vote at City Hall.

The candidates for mayor were the first to take the stage for questions that were submitted by the public and shared with the candidates beforehand.

One common theme ran throughout their responses: the need for enhanced economic development, and a feeling that Clanton is primed for growth.

“The most pressing need is for us to develop economically,” Helms said. “The stage is set.”

Driver said he has been in contact with numerous developers but is not usually at liberty to talk about those dealings.

“There are many things in the works, but those people don’t want you to talk about it until a deal is cut,” he said.

Pierce said he thinks a renewed commitment to growth is needed from city government.

“When I’m out there and I’m knocking on doors, that seems to be the general idea is we’re on cruise control,” Pierce said.

Driver touted his work to arrange for the city to pay off early a loan for the Clanton Conference and Performing Arts Center, along with the number of high-profile events that have been held there; the city’s solid financial standing; and the potential for development at Interstate 65 Exit 212 with the forthcoming opening of St. Vincent’s Chilton.

“There are a lot of kids coming right out of high school that have no direction,” Pierce said.

Helms said he thinks Clanton’s location is its greatest asset and pointed to the state Emergency Management Agency moving from Montgomery to Clanton because of its central location.

Helms said his work in emergency management would be an asset in the mayor’s office, as would a focus on safety.

“If you can’t protect the workers, they are not going to come here,” he said.

Danny Carter, Charles Powell and incumbent Jeff Price are all seeking the District 1 seat on the Clanton City Council.

Powell said the city’s building inspector should condemn any dilapidated residences or businesses, and if there is no successful appeal the city should “tear it down.”

Price said tax abatements are necessary to land new businesses, but that he thinks the abatements should usually not be renewed when they expire.

“Ten years from now, I think it’s time for you to contribute to the community,” he said.

Carter said Clanton will always have to use time and resources to keep its infrastructure as up to date as possible.

“More needs to be done,” he said. “You can never be up to date on your infrastructure. We’re ready to grow and prosper. I want to be able to shape that growth.”

Lynn Best is challenging incumbent Bobby Cook for the District 2 seat on the council.

Best said dilapidated properties has been a complaint voiced to her by residents.

“That was one of the biggest complaints as I went door to door,” she said. “We do have the plans in place, and we’ll have to enforce them.”

Cook said he thinks the city has a solid team in place to maintain its financial standing, including his experience with banking and accounting.

Best said she is a long-time Clanton resident and wants to see the city prosper.

“Sometimes we need new ideas and fresh ideas,” she said.

Al Headley is challenging incumbent Sammy Wilson for the District 3 seat on the council.

Headley said that while he thinks the city’s money has been well managed, he does think recent improvements to the West End Community Center could have been handled differently, perhaps by enlisting an architect or considering the construction of a new facility.

“I do want to see our money spent wisely,” he said and promised open communication with the people of the district.

Wilson touted the current council’s accomplishments, including the West End Community Center, providing space for Senior Connection and securing grant funds to pay for improvements to the sewer system.

“The community is as strong as its leaders,” Wilson said.

Awlahjaday Agee is challenging incumbent Greg DeJarnett for the District 4 seat on the council.

Agee did not attend the forum.

DeJarnett was given time to answer the questions provided beforehand.

DeJarnett said he thinks the mayor and council have been good stewards of the city’s finances but said more personnel may be needed.

“As this city grows, it takes more people to get the job done,” he said and added that a city manager could free up the mayor’s time for business recruitment.

“I love Chilton County,” he said. “I love the city of Clanton. I believe in the people here. I’ve had other opportunities but always came back.”

DeJarnett said quality of life issues and continued infrastructure improvement will need to be addressed during the next four years.

Incumbent Mary Mell Smith is unopposed and so will retain the seat for another four years.