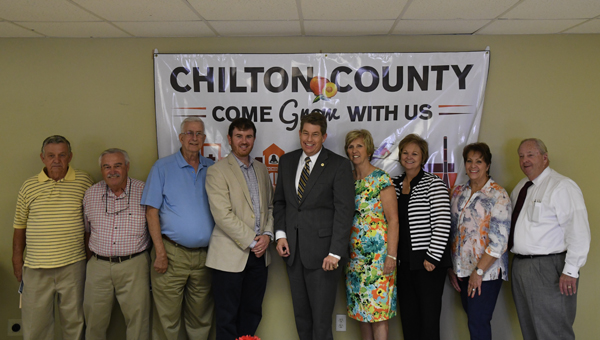 Funding for the under-construction St. Vincent’s Chilton hospital is just the latest example of state partnerships available to local residents.

Jim Byard Jr., director of the Alabama Department of Economic and Community Affairs, told those in attendance at the Chilton County Chamber of Commerce luncheon Tuesday that the organization has invested $9 million in the county since 2014.

Byard said ADECA takes federal dollars in the form of block grants and either discretionally or competitively distributes funds to governments and organizations.

Examples of local projects receiving grant money from ADECA include $450,000 for a sewer system rehabilitation project in Clanton’s West End neighborhood, $400,000 for St. Vincent’s Chilton infrastructure, $34,000 for park playground equipment, $28,485 for police equipment, $96,000 for expansion of Minooka Park in Jemison and 55 other grants totaling about $8 million.

Byard said Sibley Reynolds with the Chilton County Health Care Authority approached him about a grant for the hospital project, and that the resulting funding was an example of “local leadership and state partnership.”

“That hospital will do so much for your economic development,” Byard said.

When making decisions about grant recipients, ADECA considers whether the grant would be wise, legal and provide a return on investment for taxpayers.

“A community is only as strong as its Chamber,” he said.

The next Chamber luncheon will be at noon on Sept. 6 at Clanton First United Methodist Church’s Helen Parrish Activity Center.

Chilton County Schools Superintendent Tommy Glasscock will give a presentation.

The Collins Chapel Fire Department has been closed since its chief was charged with theft on July 28. An Aug.... read more