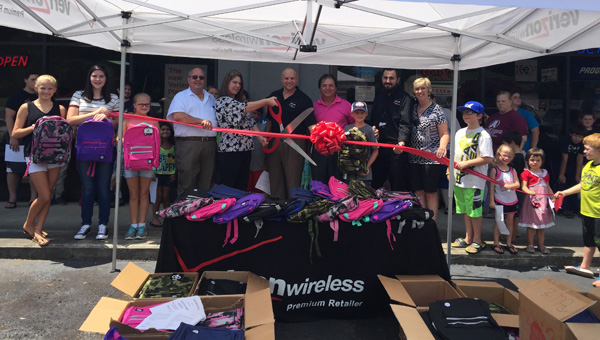 Nicole Gray cuts the ribbon, as the Chilton Chamber of Commerce was on hand for the re-grand opening ceremony of the Verizon-A Wireless store in Clanton on Saturday. (Contributed Photos)

This past weekend the Verizon-A Wireless store on Seventh Street South in Clanton held a re-grand opening ceremony that included a ribbon cutting and backpack giveaway.

The Chilton County Chamber of Commerce held a ribbon cutting to commemorate the completion of the store’s remodeling project.

According to store manager Nicole Gray, the renovations were a long time coming and plans for the store’s remodel had been discussed since January 2013.

“Our store was pretty outdated,” Gray said. “It was quite emotional once it finally happened, because you continue to hear about it and it just builds up in your mind.”

The lobby of the store was extended 6 feet, which will provide added room for product displays and customer service.

The store remained open throughout the remodeling process. 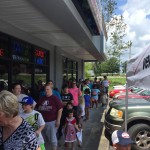 Heat and humidity did not stop a long line of families from forming during the backpack giveaway portion of the event.

“We’re not just one counter anymore,” Gray said. “Our customers now have much more room to maneuver.”

A wireless is a Verizon premium retailer with over 770 locations throughout the United States.

With the school year on the horizon, a backpack giveaway was held in association with the re-grand opening ceremony as part of a company-wide initiative.

A total of 125 backpacks with some school supplies were handed out. The backpacks were spread out on a table that was setup outside under a tent in front of the store.

“The event was about the community and not about selling,” Gray said. “That’s why we held it outside. We didn’t want anyone to feel pressured into anything.”

According to Gray, the store provides 25 percent off to local business owners, and is continually looking for new and inventive ways to help the local business sector thrive.

“We want the community to know that without them, we wouldn’t be here if it wasn’t for their continued support,” Gray said. “It’s nice to give back and say thanks.”

Verizon-A Wireless sells an array of electronic devices from the basic text and call cell phones to the most recent version with Internet streaming capability.

The store’s business hours are from 10 a.m. to 8 p.m. Monday through Saturday and noon to 6 p.m. on Sunday.